END_OF_DOCUMENT_TOKEN_TO_BE_REPLACED

…then you’ll be missing the best new show of the fall season.

You may recall from my Fall TV Preview that I said of the pilot for “Community,” “When I watched it, I was convinced that I was watching the funniest sitcom of the new season. I was not wrong.” Now, granted, I was predisposed to like the series before I’d even put the screener of the pilot into the DVD player – I’m a fan of Joel McHale’s work (I’ve got a TiVo season pass for “The Soup”) and Chevy Chase’s work in virtually every film that he made during the ’70s and ’80s (though, to be honest, the only film he’s done since then that I still enjoy revisiting is “Memoirs of an Invisible Man”) – but it certainly didn’t hurt seeing “Daily Show” correspondent John Oliver turn up in a meaty guest role within the first few minutes, and it didn’t take long for me to fall for the ensemble as a whole.

Here’s a rundown of the characters:

When I arrived at the TCA summer press tour, I was a man on a mission: to interview as many members of the cast of “Community” as I possibly could, so that I might do my damndest to get people to watch the series. Not that it necessarily needs my help, given the incredible promotional push that the network is putting behind the show, but, still, it’s been a long time since I’ve seen a sitcom that’s this funny and has this strong an ensemble from the word “go” (seriously, I think I’d have to go back to “NewsRadio”), and I wanted to do whatever I could to get the word out. In the end, I ended up chatting with five of show’s regulars during the tour (McHale, Pudi, Brown, Glover, and Jeong), catching up with two more by phone after making back (Jacobs and Brie). 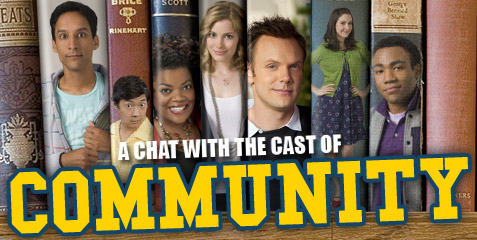 Sadly, Chevy Chase was surrounded by hordes of my peers through his time at the tour, and attempts to secure a phoner with him prior to the run date of this piece were unsuccessful. We’re keeping our fingers crossed that we’ll be able to talk to Chevy sometime in the near future…and, y’know, don’t be afraid to drop NBC an E-mail and ask them to try and make it happen for us…but in the meantime, click here (or on the above graphic), then sit back and enjoy these conversations with the rest of the cast.

When you finish, I’ll be very surprised if you don’t run straight to your TiVo and order yourself up a season pass for “Community.” It’s that good. I swear. And if you don’t believe me, here’s proof:

Finally, check out Chopard, one of the most recognized watch and jewelry brands in the world.

Starring: Jay Leno
Producers: Debbie Vickers, Larry Goitia, Jay Leno, Jack Coen, Stephanie Ross (“The Tonight Show with Jay Leno”)
Network’s Description: Marking a new era in television, Jay Leno, recently named America’s Favorite TV Personality by the 2009 Harris Poll, moves from late night to primetime on September 14 when his series becomes the first-ever entertainment program to be stripped across primetime on broadcast network television. The series promises more comedy in the 10 o’clock hour and will showcase many of the features that have made Leno America’s late-night leader for more than a dozen years.
The Buzz: About as mixed as buzz can be. This is the most controversial maneuver in the past several decades of television history, a Hail Mary by the people at the Peacock. It’s highly possible that the people who’ve abandoned “The Tonight Show” since the tall, skinny Irish kid took over have just decided to go to bed early for a change and are fully prepared to start watching their old buddy, Jay, in his new locale. Then again, maybe they won’t. It’s a crazy crap shoot, this series, and all that us critics can do is sit back and see what the viewers decide to do.
Pilot Highlight: None, obviously, due to the live nature of the show.
Bottom Line: If you like Jay Leno, you’ll like the show. If you don’t, you won’t. It’s really as simple as that. But will you watch the show? Leno has the right attitude by acknowledging outright that he doesn’t expect to beat original programming, only anticipating that they’ll probably start to take home the ratings gold once the reruns start. I like Leno as much as the next guy, but I like scripted dramatic programming better. For that alone, I’m not exactly rooting for him to succeed. But with that said, I’m mostly just curious to see what’s going to happen.

END_OF_DOCUMENT_TOKEN_TO_BE_REPLACED