END_OF_DOCUMENT_TOKEN_TO_BE_REPLACED

Kids Today: So You Want to Be President…and More Stories to Celebrate American History

I originally kicked off this column with a review of “Alvin and the Chipmunks: The Chipettes” back in January 2009, intending to regularly sit down with my daughter, watch whatever DVDs of child-friendly programming came into the Bullz-Eye offices, and get her take on them. Seemed like a great plan at the time, but if you click on the category for “Kids Today” at the bottom of this posting, however, you’ll find that I, uh, haven’t actually written another column since I kicked it off. The problem, you see, is that Ally, God bless her, is a lot like me…which is to say that, when it comes to TV, she has a short attention span which is only lengthened when we’re watching one of what she refers to as her shows. Although this list of shows varies, some of the stalwarts over the course of her 4-year life span have included “The Simpsons,” “Sesame Street,” “Curious George,” “Arthur,” and the God-awful “Caillou,” along with relatively recent additions like “Sid the Science Kid” and “Dinosaur Train.” For better or worse, however, we don’t tend to get those titles, and the kid stuff that we do get…? 9 out of 10 times, she simply can’t be bothered. 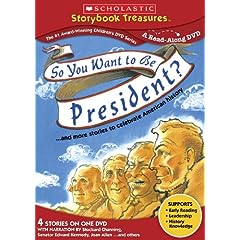 But Ally’s a smart kid, and an observant one as well, so you never know what’s going catch her interest. Take, for instance, her fascination with the President of the United States. I guess I shouldn’t be surprised that she was intrigued by last year’s Presidential election, given that she had to endure people talking about Barack Obama and John McCain for quite a few months there, but she’s continued to ask us about this President and that, even picking up a few names and facts about previous Commanders in Chief along the way. With this being the case, I thought that, for once, I might actually be able to hold her interest with a DVD that was being offered up for review: So You Want to Be President…and More Stories to Celebrate American History, the latest release from Scholastic.

When the DVD arrived, I showed it Ally and explained that it contained animated readings of four stories: “So You Want To Be President,” by Judith St. George, “My Senator and Me: A Dog’s-Eye View of Washington, DC,” by Senator Edward M. Kennedy, “Madam President,” by Lane Smith, and “I Could Do That! – Esther Morris Gets Women the Vote,” by Linda Arms White. She seemed cautiously optimistic but warned me ahead of time, “All right, but I only like George Obama.” Yeah, I know, that’s the sort of silly-kid punchline that even “Family Circus” would throw into the reject pile, but she was really tired. As a proud father, I must assure you that she knows that Washington was the first President of the United States, can identify Obama as the current President and George W. Bush as his predecessor, and – courtesy of her mother – can identify a piece of trivia about Abraham Lincoln, which you’ll read about in a moment.

END_OF_DOCUMENT_TOKEN_TO_BE_REPLACED 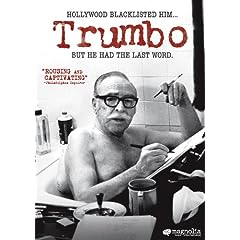