How to end a TV series “Breaking Bad” is back tonight, and we’ll see how creator Vince Gilligan decides to wrap things up. Here’s an in-depth look at the issue of how to conclude a great television series.

“Homeland” has won the award for Best Drama Series two years in a row, while Claire Danes and Damian Lewis won for best actress and best actor. It’s a pretty incredible show, even with the elevated craziness of Season 2. And while I don’t think it’s quite as good as “Breaking Bad” it’s hard to argue with these choices. 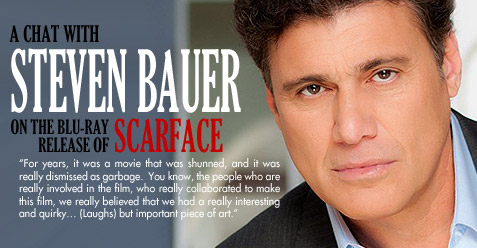 Actor Steven Bauer is the sort of down-to-earth guy who’s willing to come right out and tell an interviewer that, overall, his career in Hollywood has been “kind of… a little iffy,” so it really does the heart good to see him currently experiencing a bit of an upswing in his success. If you’re a fan of “Breaking Bad” – and, really, why wouldn’t you be? – then you saw him make the first of his two appearances on the show this season, and the timing couldn’t be more perfect: between those episodes lies the Blu-ray release of “Scarface,” where Bauer ably held his own against Al Pacino with his performance as Tony Montana’s brother from another mother, Manny Ribero. Although we only had a short time to talk, Bullz-Eye still managed to get Bauer’s recollections of working on both of these projects.

Check out a sample of our chat with him below and then head over to Bullz-Eye for the full interview.

Bullz-Eye: With “Scarface,” my understanding is that it was a combination of your very authentic Cuban background and your audition that helped you get the part. How did you prepare for the audition?

Steven Bauer: Wow, it was… I’ll tell you what: it was pretty daunting at the time. What I did was… y’know, I read the script, I knew the script and I understood it, knowing that I had very little in common with this character of Manny. Fortunately, I’d met guys like that, so I had something to draw upon. Because I’m the antithesis of Manny. Well, I was then. I probably became more and more like Manny as I got older. (Laughs) But at 24 years old, I was more like Justin Bieber than Manny Ribera! But I had seen those guys, y’know, growing up in Miami. I’d seen guys who were that way, and that’s really what I drew upon. Also, it was the sensibilities of the Cuban who has lost his homeland and is really sort of adrift in the world and looking for any harbor. Landing in the United States is the opportunity to do anything you want to do and be anything you want to be.

BE: Talking about your inherent Cuban-ness, did it ever give you pause at all that so many non-Cuban actors were selected to play Cubans in the film?

SB: Not at all. Will, honestly, it was an amazing coming together of actors, and I for one… well, first of all, who am I to judge? (Laughs) But secondly, there was no room for judgment, because the actors that they chose, beginning with Bob Loggia as Frank Lopez. He did his own work, he did his own research, and he came up with a totally original Cuban character that… I recognized him immediately. He’s that guy who laughs at his own jokes. He’s a big blowhard, y’know? It was a fantastic character that he created. And then Murray Abraham created that weasel of a man, Omar. And the other guys who weren’t Cuban, the guy who played the Bolivian – God rest his soul, Paul Shenar, who passed away years ago – he was fantastic. And he had no knowledge of any Bolivian. But he did tremendous research. And when you look at the whole canvas of the actors that were chosen, they’re all stars. They’re all beautiful, amazing artists. Michelle Pfeiffer, in her second film role ever, she created this beautiful, beautiful character, this haunted girl who’s just completely lost and attached to this power, to this man, and then attaches himself to the other man as soon as he gets the power. And again, the actors who were playing Cubans, they were all… the ones who were playing the important roles in the film, they all did amazing, amazing work. I always, always defend it.