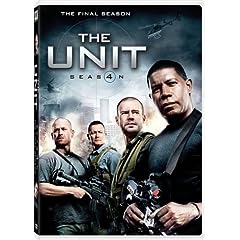 “The Unit” focuses on a clandestine group of highly-trained soldiers as they execute military missions all around the world. Those that gave the show a try in its first season might want to take another look. “The Unit” struggled early on to find a balance between the intense and compelling military missions (that made male viewers happy) and the sometimes mundane home-front storylines (that kept the female viewers happy). Over its last two or three seasons, the missions have been its focus, and the series has thrived because of it. Season Four is no different.

While the writers didn’t know until the very end that the show would be canceled, they did a pretty nice job of wrapping up several series-long storylines. For example, in the two-part episode, “Into Hell,” Col. Ryan (Robert Patrick) has to answer for having affair with one of his subordinate’s wives. Also, the team leader, Jonas (Dennis Haysbert), sees his marriage falls apart as he faces his own future (and mortality) with the unit.

Special features include a few deleted scenes and three featurettes. “Into Hell: A Brotherhood Divided” focuses on the aforementioned two-episode finale to the Col. Ryan affair story arc. “Shadow Riders: A Western Come Undone” reveals how the show used the California desert as an Afghanistan-like backdrop. And “Snake Doctor: A Leader Among Us” follows Dennis Haysbert as he directs an episode.

During its last two or three seasons, “The Unit” was one of the best shows on television, and the 22-episode Season Four provides a satisfying ending to the series run.

“Lie to Me” is a series which I would’ve watched a heck of a lot more if it hadn’t always been up against a series that I already had an existing addiction to, but every episode that I did see was enjoyable, so I’ve already got my order in for a copy of the Season 1 set, so that I can be properly prepped for Season 2. There’s also another really good reason to be ready for the show’s sophomore outing: they’ve added Shawn Ryan – a.k.a. the man behind “The Shield” – to the series’ production team.

How did such a thing come to pass? In a nutshell, Samuel Baum asked him to join, and although the two hadn’t really known each other, Ryan was swayed both by a sudden opening in his schedule and the company Baum was keeping.

“I came out and helped out a little bit on the last couple episodes as a favor to the studio,” explained Ryan. “I didn’t really know Sam, but I had a couple of my old ‘Shield’ writers who were over there, and I thought, ‘Well, that will be cool.’ I enjoyed it: I got to meet Tim and the rest of the cast, I dug the show. ‘The Unit’ was unceremoniously dumped by CBS, so I suddenly found myself with a little time, and I thought I could bring something to the show. It was something that excited me. You see the actors here: it’s an incredible cast, and I just want to get to know these characters better. And believe me, there’s enough work on a TV show for both Sam and I. So it really is a very cooperative, very friendly relationship. There was no “All About Eve” sort of situation here. There’s plenty for both of us do. In terms of what I think I might bring to it, I think I’m trying to push it a little bit more in a character direction, add a little bit of adrenaline to the show, but really sort of dig deep.”

So by “adrenaline,” are we talking more explosions, or what?

“No, no, I don’t mean that exactly,” Ryan said. ” Listen, the show is ultimately based on a group of scientists. And Mekhi (Phifer) plays a character who is not a scientist. But the fact is they are people who are diving into the middle of charge cases and accusing people of being liars. That can lead to consequences. So I don’t mean adrenaline in a ‘Shield’ sense or a ’24’ sense, but they are going to put themselves in some emotionally and physically harrowing situations at times. And I think the pace of the show will increase slightly. And we have a lot of story to tell, and I just think there’s some juice that can be added to the show in a fun way.”