– Fox released it’s fall schedule. “Dollhouse” was renewed and “Terminator: The Sarah Connor Chronicles” wasn’t. President Kevin Reilly said it wasn’t an either/or situation, but that the bet on “Dollhouse” was a bet on its producer Joss Whedon. I want to hear from people who watched both shows — was “Dollhouse” better? Because “Terminator: TSCC” was damn good down the stretch. (On a side note, how long do you think it will take Summer Glau to find another role? Hint: Not long.)

– Fox prez Kevin Reilly is apparently a big fan of Tyler Labine (who plays Sock on “Reaper”). Labine is set to star in the comedy “Sons of Tuscon,” which debuts in January. Clearly, this is not good news for “Reaper” fans.

– Ponderously, ABC renewed “Scrubs,” which only plans to have Zach Braff for six episodes. What’s the point?

– NBC renewed “Chuck” for 13 episodes, but it came at a price. There were significant budget concessions, so fans might notice that parts of the supporting cast may disappear at times. I stopped watching early in the season because it was getting kind of silly (and that whole Chuck/Sarah dance was getting tiresome) — did it get significantly better down the stretch?

– Fox has renewed “Bones” for not one, but two years, according to Variety.

– CBS picked up a Chris O’Donnell-led spinoff of “NCIS” which is going to “focus on undercover ops instead of forensics.” Wait, wasn’t that the premise of “The Unit”?

– If no one watches “Samantha Who?” and it gets canceled, does it make a sound? Juuuuust kidding. (Not about it being canceled.)

– “The Office” creators (and I’m talking about the original UK version), Ricky Gervais and Stephen Merchant, inked a deal with HBO to produce an animated comedy based on their podcast about their unusual friend, Karl Pilkington, whom they seem to think is the most fascinating man in the world. (And coming from those two, that’s high praise.)

– ABC has renewed “Castle,” “Scrubs” and “Better Off Ted.” After watching the finale, I can’t say that I’m happy “Scrubs” is back, but I wonder what the show’s devotees think about its renewal. Anyone?

– “Dollhouse” received a surprising renewal from Fox. “The 20th Century Fox TV fantasy drama starring Eliza Dushku has delivered modest but consistent ratings on a low-trafficked night, thanks to Whedon’s built-in fan base.” The show looks good for a 13-episode pickup. What does this mean for “Terminator: TSCC”?

– Think last night’s finale of “Prison Break” is the end? You’d be wrong. There’s a two-hour, straight-to-DVD movie that tells the story of how Michael actually died. It’s due out July 28th.

– I haven’t watched “Lie to Me” because I am generally anti-procedural these days, but the news that “The Shield” and “The Unit” creator/producer Shawn Ryan is joining the series as its showrunner has me intrigued. Unfortunately, this probably means the end for “The Unit.” R.I.P., my friend.

– Even though the finale to the eighth season felt a lot like a series finale, a ninth season of “Scrubs” looks like a lock because Zach Braff has agreed to appear in six episodes. Six episodes? For real? What’s the point?

– “Glee,” the latest from “Nip/Tuck” creator Ryan Murphy, got a great review from EW.com, even though the reviewer is not a musical kind of guy. “Glee” is a musical comedy, with an emphasis on comedy. It debuts next Tuesday on Fox.

– Kiefer Sutherland tells Reuters that the eighth season of “24” is probably the “most realistic” yet. This is good news because the last seven seasons have gotten increasingly ridiculous.

– DEADLINE HOLLYWOOD writes that the “Gossip Girl” spinoff (“Lily”) is already dead, and TV.com speculates its because there just isn’t enough room for all of the hour-long dramas the CW wants to debut next fall. That is, unless “Privileged” gets the boot. I, for one, find Lily van der Woodsen to be the most interesting character on “Gossip Girl” and would like to see a spinoff surrounding a young Lily in the ’80s.

– THE LIVE FEED reports that the ratings for the series finale of “Dollhouse” dropped to a season-low. Not a good sign.

– Amidst all the information that VARIETY provides in terms of new shows for fall, it looks like “Scrubs” and “Better Off Ted” may each see another season. After watching the season finale of “Scrubs,” I have no idea where they go from here, but hey…

A Chat with Bill Lawrence: The “Scrubs” Exit Interview

By the time you read this, “Scrubs” will have completed its eight-season run. Or not. That’s kind of still being decided, actually. But for all practical purposes, the series has still come to some sort of a conclusion, since even the rumored continuation of the show – which is still under discussion by ABC – would almost certainly be a new permutation that might or might not resemble the existing series. As such, we decided we’d check in with “Scrubs” creator Bill Lawrence and chat with him not only about this season but, indeed, to offer a few random questions about the series as a whole. Mind you, it took for-freaking-EVER to finally get him on the phone, but we decided to let him slide. After all, the dude’s got a broken leg and he created the best blend of comedy, drama, and medicine this side of “M*A*S*H.” That kind of thing tends to earn you a little slack from TV critics. 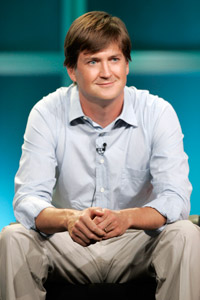 Premium Hollywood: I’m good, man. How are you doing?

PH: Not a big deal. The beauty of working at home: I’m always busy. So how did you break your leg, and why didn’t it make it into the gossip rags?

BL: I know, right? I was just playing basketball. It’s kind of a drag.

BL: Yeah, I’m just doing rehab for a couple of months. I can’t tell you how boring having a broken bone as an adult is. (Laughs)

PH: Well, I dared to ask my Facebook friends for questions, and the predominant one seemed to be, more or less, “Why does my favorite show have to end?” But, then, at last report, it was still undecided if it actually was ending.

BL: Well, you know, we’ll see, right? Yeah, it’s definitely a “we’ll see.” It’s 50/50. But either way, Will, even if the show goes on past this, it won’t be the same show. And to me, the thing is, after nine years, there’s no way that we wouldn’t get repetitive next year, so even if it does go on, this’ll feel like the end of “Scrubs.” To me, it’s the end of “Scrubs” as we know it either way.