Really? This is how they’re going to end “Reaper”? Ugh.

“Reaper” fans have known for several weeks now that the show probably wasn’t going to return in the fall, but we kept watching in the hopes that the series would at least wrap up with some sense of closure.

“Reaper” has been pretty good this season though with the late premiere date it was obvious that it was on the cutting block. Let’s just hope that [Michele] Fazekas and [Tara] Butters can wrap up the series properly instead of letting “Reaper” simply go dark. No one wants that.

For most of the season/series finale, “The Devil & Sam Oliver,” it looked like we might get some sort of a satisfying ending. Sam had discovered a way to get out of his deal with the Devil and had picked a contest — “Quarters” — that would give him a legitimate shot of succeeding. (No pun intended.) Even when Steve showed up and broke his right hand, I still held out hope that he’d manage to beat the Devil with his left hand.

Instead, with the souls of both Sam and now Andi owned by the Devil, we are treated to a scene of Steve (sort of) explaining that his orders came from “up above.” He shows off his wings and joins a bunch of other angels in the night sky. Cut to Sam and Andi looking up in wonderment. Fade to black.

This should be filed under “How Not to Handle a Finale.” The series was on the chopping block for the last couple of months, and even if producers Michele Fazekas and Tara Butters wrapped up production a while ago, they (or the network) should have had the foresight to shoot an alternate ending or two to give them the option of going in another direction if the show were canceled.

How hard would it have been to shoot a scene of Sam knocking a couple of quarters in with his left hand? Or what about cutting the scene where Steve breaks his hand and have the Devil figure out to cover his eyes after the first miss and force Sam to make all five shots with his right hand? Sam gets his soul back, Andi is safe and the series can end with some sense of closure.

Instead, the series is sent spinning off into another direction, and we’ll never really know how how the story of Sam, Andi, Sock, Ben and the Devil really ends. If we had some closure, I might recommend that my friends watch the show on DVD. But why would I subject them to this painful ending?

Shame on the CW for not insisting that multiple endings be shot. Shame on Butters and Fazekas for the same thing, and for jumping ship even before the fate of “Reaper” was sealed. This finale is a slap in the face of all the fans who stuck with the show for its entire run. Say what you will about ABC’s decision to cancel “Life On Mars,” at least the network and the producers were on the same page in that both sides wanted to give the series an appropriate ending.

More commentary on the “Reaper” finale:

END_OF_DOCUMENT_TOKEN_TO_BE_REPLACED 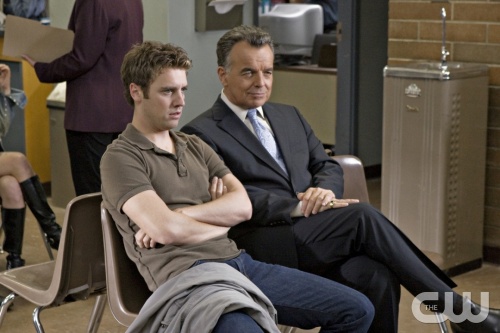 Bad news for “Reaper” fans — the show’s creators just signed a deal with a rival studio, so it looks like the show’s fate has been sealed.

Under the seven-figure pact, the duo will join a 20th TV series and develop projects for the studio.

Fazekas and Butters’ exclusive deal with 20th TV effectively seals the fate of their bubble CW series as it calls for them to leave “Reaper,” produced by ABC Studios, where the two had been based.

“Reaper” has been pretty good this season though with the late premiere date it was obvious that it was on the cutting block. Let’s just hope that Fazekas and Butters can wrap up the series properly instead of letting “Reaper” simply go dark. No one wants that.