Irvin Kershner, who died Saturday at age 87, was a solid journeyman director, his early films — several of which, especially “The Flim-Flam Man” and “The Luck of Ginger Coffey” are supposed to be pretty good — are obscure enough that even I haven’t seen too many of them. He was also a graduate of the USC Film School in 1950, which makes him, I guess, about the first of the film school brats.

He’s known today primarily because of two strong, dramatic action films. The first was a 1976 fact-based TV movie, “Raid on Entebbe.” The second was, uh-hmm, “The Empire Strikes Back.” For one film in the series, a “Star Wars” film had a genuinely well-written screenplay with good dialogue and a director who knew how to elicit strong work from actors and structure a dramatic moment. For some reason, everyone agrees it was the best of the series. Watch this scene again, though you’ve certainly seen it before. There’s emotion going on.

Kershner was, I gather, a gracious and intelligent man. Here is a brief tribute/outtake from the documentary “The Nature of Existence” in which Kershner endorses “the Force” in a way, while also speaking out for a spiritual, but entirely non-supernatural view of life, death, and creativity.

Much more, as usual, at MUBI.

UPDATE: The fine blogger Greg Ferrara argues that “The Luck of Ginger Coffey” was a lot better than “pretty good.”

“The Empire Strikes Back” 30 years later

And don’t give me any of this “Episode 5” crap. Just a couple of trailers and a news clip to wrap my little mini-“Star Wars” marathon.

END_OF_DOCUMENT_TOKEN_TO_BE_REPLACED

“The Empire Strikes Back” was a remake!

No, actually, it wasn’t. Still, we film geeks love to complain about remakes, which is why I think the idea of a “premake” is kind of beautiful. Watch, and I think you’ll get the drift.

h/t to the very cool site Lando is the Man for this. There’ll be more Lando-ish stuff to come. 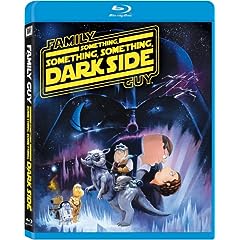 When FOX decided to give “Blue Harvest” – the first of the “Family Guy”-themed “Star Wars” specials – its own DVD release separate from the season sets, fans were a little annoyed. The studio must have made a killing in sales, though, because it’s gone one step further in screwing over its loyal audience by releasing the follow-up, “Something Something Something Dark Side,” direct to DVD. The betrayal wouldn’t burn so much if the 54-minute special lived up to the quality of its predecessor, but despite the reputation of the film it’s spoofing, this is one sequel that falls well short of that. There are a few good jokes about AT-ATs, the shitty accuracy of Stormtroopers, and the looming fate of Luke’s right hand, but a majority of the jokes fall flat. It feels more like a straight retelling of “The Empire Strikes Back” with “Family Guy” characters than a parody, and though guys like Mort Goldstein (as Lando Calrissian), Carter Pewterschmidt (as Emperor Palpatine) and the Giant Chicken (as Boba Fett) finally have a role to play in the story, it’s more out of necessity than because it’s funny. The addition of a snarky pop-up trivia track helps increase the special’s replay value, but it doesn’t change the fact that “Something Something Something Dark Side” is a bit of an unexpected disappointed for fans of “Star Wars” and “Family Guy” alike.

First thing’s first: tonight’s episode must had one of the coolest titles in the history of television. It’s exactly this kind of geek humor that makes the “Lost” writing team one of the best in the business. (Check out Will Harris’ interview with executive producers Carlton Cuse and Damon Lindelof for further proof.) In fact, I liked it so much that it wouldn’t have even mattered if it didn’t make any sense in the end, but as it turned out, it did, and suffice it to say that it led to one of the biggest laughs of the night. I thought for sure Hurley was scribbling something in his journal a little more important than a script for “The Empire Strikes Back,” but then again, that’s Hurley for you. His scenes with Miles have helped fill the void ever since the big guy became friends with Sawyer, and though tonight’s episode was all about Miles, it was a great to have Hurley along for the ride.

Along with Faraday, Miles has been one of my favorite characters since his arrival in Season Four, so it was nice to finally get some backstory other than the brief bits we saw in the episode featuring his first appearance. I believe Cuse and Lindelof intended to address Miles’ past at some point last year, but had to cut the story when the season was shortened by the strike. Whatever the reason, it actually worked for the better now that the Losties have travelled back in time. We always knew that his sixth sense was the reason he was recruited by Widmore, and some of us have even had the hunch that Marvin Candle (or Pierre Chang) was his father when it was suggested that he had previously visited the island, but I don’t think anyone realized that Miles knew as well.

As it turns out, he’s known ever since his third day as a member of the Dharma Initiative when he spotted his mother in the lunch line at the cafeteria. (At least he didn’t hit on her à la “Back to the Future.”). Heck, he even saw himself as a baby later on, which begs to ask the question: is Miles’ special ability a product of his time on the island or is it just sheer coincidence? I don’t think we’re going to find out the answer to that just yet, but one thing we do know is that Miles is adamant about not wanting to meet his father. He’s more or less forced to, though, when Horace gives him a special assignment to deliver a package (read: dead body) to Candle at the Swan station.