A Chat with Dean Stockwell (“Battlestar Galactica: The Plan”)

Dean Stockwell is one of those generational actors, the kind who’s known for a different project for every decade that he’s been in the business…and since he was playing against the likes of Frank Sinatra and Gene Kelly by the time he was ten years old, that’s a lot of projects. Maybe you know him from “The Boy with the Green Hair” or “Gentleman’s Agreement,” or perhaps from his work as Al on “Quantum Leap,” or as Ben in David Lynch’s “Blue Velvet.” In short, the guy gets around. As of late, he’s been picking up raves for his portrayal of the Cavil model of Cylon in “Battlestar Galactica,” a role which he has reprised for the new film, “Battlestar Galactica: The Plan.” We chatted with him about just how evil Cavil is, of course, but we also learned about his connection to Neil Young, his longtime friendship with Dennis Hopper, and that, once upon a time, there was actually a chance that a film entitled “Werewolf of Washington” could’ve been a classic.

Join us now for…

END_OF_DOCUMENT_TOKEN_TO_BE_REPLACED

You’re familiar with Jason’s “Blu Tuesday” column? Well, given how many TV-DVD sets continue to hit the market on a weekly basis, it occurred to me that it might not be such a bad idea to do a regular round-up of the highlights of what the TV geeks out there…and, obviously, I count myself among their number…can look forward to finding on store shelves on a given week. And, thus, I bring you…

This Tuesday in TV-DVD!

Yeah, I know: it’s not a great title. But at least you can’t claim there’s any false advertising.

* Battlestar Galactica: The Plan: I was able to talk with Dean Stockwell on Friday about this new flick, but at the time, I hadn’t seen it yet…and, y’know, you can’t bluff when you’re talking to Cavil, so it was a little embarrassing when I had to admit my ignorance. Fortunately for you, John Paulsen has since reviewed it for us, giving it four stars and providing this warning: “Newbies who are considering jumping into the series should not — I repeat SHOULD NOT — start with ‘The Plan,’ for three major reasons: 1) this was meant as an epilogue, not a prologue, 2) it could be extremely confusing, and 3) there are way too many secrets that would be revealed in one fell swoop. Don’t do it.” Listen to the man, I beg you.

* Monty Python: Almost the Truth – The Lawyer’s Cut: If saw my posting about my trip to NYC to attend the Python reunion on behalf of this film, then you already know I’m partial to this set. As such, you don’t really need to see my proper review of the full-length documentary on Bullz-Eye, but if it helps, I’ll just offer up the last line, in which I state, “If you’re looking for the no-holds-barred story of the group (but not their subsequent solo projects, which – aside from what they’re doing currently – are ignored), then this is definitely the place to go.” It’s also worth noting that there are a couple of other Python DVDs which have in no way coincidentally emerged this week, but while I’m sure “Monty Python: The Other British Invasion” and “The Best of Monty Python” have their merits (and, indeed, I believe the former will soon be reviewed by our own David Medsker), there’s no question that “Almost the Truth” is the absolute must-own of the bunch.

END_OF_DOCUMENT_TOKEN_TO_BE_REPLACED 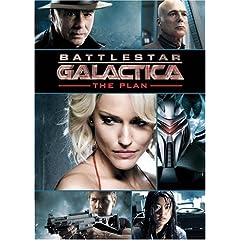 “Battlestar Galactica” is the gift that keeps on giving. First, we learned that its prequel/spinoff, “Caprica,” will debut on Syfy in 2010, and this Tuesday “Battlestar Galactica: The Plan” hits the shelves. It’s a 110-minute look at the planning, execution and aftermath of the Cylon attack on the colonies, completely from the Cylon point of view.

The film’s timeline spans from about two weeks before the attacks all the way through the initiation of the human-Cylon truce. It revolves around two copies of Number One that develop two very different perspectives. The original plan was to annihilate the human race completely, but when that plan fails, “Brother Cavil” orchestrates a Plan B as part of the fleet, interacting with and directing Leoben, Doral, Boomer, a couple of Sixes and a Four. The film re-visits a few key moments of the series, including the initial attacks, Boomer’s failed assassination attempt and subsequent murder, as well as Kara’s visit, incarceration, escape and return to Caprica.

The story jumps ahead and around, and it takes a good understanding of the “Battlestar Galactica” mythology to keep up. Newbies who are considering jumping into the series should not — I repeat SHOULD NOT — start with “The Plan,” for three major reasons: 1) this was meant as an epilogue, not a prologue, 2) it could be extremely confusing, and 3) there are way too many secrets that would be revealed in one fell swoop. Don’t do it.

Since the Number Ones really came up with the plan, Dean Stockwell sees a ton of screen time and carries it beautifully. It’s interesting to watch the embedded Cylons, sleeper agents and Final Five interact when only the embedded Cylons really know what’s going on. They try to manipulate the humans and Final Five, with varying degrees of success. The straight-to-DVD version is uncensored so there is some gratuitous nudity and a sex scene. It’s so gratuitous that it feels completely out of place.

Qualms aside, “The Plan” is a compelling look at a big part of the series run and is a must-watch for those fans who want to see some of their old friends once again.

In addition to filmmaker commentary, special features include a featurette that follows director Edward James-Olmos around for a day, a series of interviews with the actors who play the key Cylons, a behind-the-scenes look at the planning and execution of the special effects behind the Cylon attack on the colonies, and a featurette that explores some of the visual effects added during post-production of “The Plan.”