Ever since the writers’ strike, the television industry has been in a state of flux. Most networks still can’t figure out what works from what doesn’t, while the current economic climate has forced others to simply give up. Whether or not “The Jay Leno Show” is a success for NBC is debatable, but by surrendering the 10 p.m. time slot, they’ve greatly decreased their chances of bringing in new viewers. We would be exaggerating if we said the decision affected Bullz-Eye’s latest edition of the TV Power Rankings, but our Winter 2009 list does seem suspiciously familiar. Still, it isn’t without its surprises, as a longtime favorite returned from an extended hiatus to claim the top spot, while buzzworthy rookies like “Glee” and “FlashForward” also made impressive Top 10 debuts. At the end of the day, however, the real winner is HBO, who walked away with three of the four top spots, thus reestablishing themselves as the best network around.

A few examples from the piece: 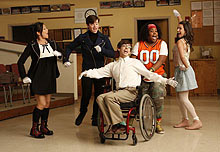 5. Glee (Fox): There isn’t a show on this list that we love and hate with the same enthusiasm that we have for “Glee.” It contains some of the best-drawn characters in Fox’s history (aspiring diva Rachel Berry, adorable germaphobe Emma Pillsbury, cantankerous alpha female Sue Sylvester), and the iTunes chart-burning musical numbers, lip synching aside, are deliriously fun. Imagine, then, if they didn’t make these characters jump through such ridiculous hoops. Will’s wife is actually going to take her fake pregnancy to term? Emma agrees to marry Ken, but only as long as they never tell a soul? (Those plot threads brought to you by Bad Idea Jeans.) Yet for each blunder the show makes, they come up with something as brilliantly funny as Finn’s technique for not climaxing (he thinks about the time when he hit the mailman with his car), or the drama queen freak show that is Sandy Ryerson (a pitch-perfect Stephen Tobolowsky). Getting Josh Groban to do a cameo as a horndog version of himself, meanwhile – and hit on Will’s drunk mother – was a moment of “Arrested Development”-style genius. Yes, it’s made mistakes, but “Glee” gets a spot in our Top Five because no other show on TV sports dialogue like “mentally ill ginger pygmy with eyes like a bush baby.” But man, it would be a wonderful world if they did. – David Medsker 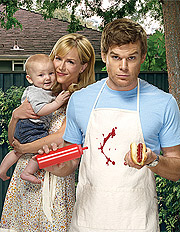 15. Dexter (Showtime): Like “The Sopranos,” Dexter always has a theme that is explored within a season as a backdrop to the episodic progression of the show. Last season, it examined friendship within the context of Dexter’s secret world, and Jimmy Smits was brilliant as his first and only pal. This year explores the facets of intimate relationships, and balancing work and the rest of your life as it relates to it. Dexter (played with brilliant sincerity and conviction by Michael C. Hall) is struggling to find balance between his work as a blood splatter analyst, a new dad of an infant, stepfather to his wife’s kids, and his hobby of killing and dismembering other bad guys, while his entertainingly foul-mouthed sister Deb implodes the most stable relationship of her life when she sleeps with returning lover and retired FBI agent Frank Lundy. John Lithgow is also scary good as the Trinity Killer, the latest object of Dexter’s attention. When Trinity kills Lundy and wounds Deb while making it look like another killer’s signature, Dex is commanded by the ghost of Harry to seek revenge, making this season as entertaining as any in the past – no easy feat considering how consistently good this show has been. – R. David Smola 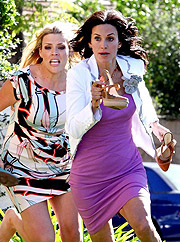 Honorable Mention – Cougar Town (ABC): Yeah, yeah, we know: the title’s a bit dodgy. But Bill Lawrence, who co-created the show with Kevin Biegel, has said, “The roll of the dice I’ve made is that the title is noisy and that people will be aware of this show.” True enough, though the fact that the series stars Courtney Cox would’ve probably done a pretty decent job of putting it on people’s radar, anyway. The pilot alone was strong enough to suggest that “Cougar Town” could prove to be the perfect series for female viewers who’ve outgrown “Sex and the City,” but with enough of a dysfunctional family element to fit perfectly into the closing slot in ABC’s new Wednesday night comedy line-up. Although the show continues to hone its comedic formula, the trio of Cox, Christa Miller and Busy Philipps clicked immediately (particularly the latter two, with their characters’ diametrically opposed personalities), and the relationship between the teenaged Travis and his man-child of a father rings true with its blend of unconditional love and complete embarrassment. Now that Jules’s fling with Josh is over, however, we’re curious to see who’ll be next on her slate to date — and how long this one will last. – Will Harris

Returning in 2010 – Lost (ABC): Here we are, folks. After five seasons of confusing viewers with one of the most elaborate mythologies on television, “Lost” is finally in the home stretch. Want to know what the heck that smoke monster really is? How about the weird statue? Heck, what about the Dharma Initiative itself? All will supposedly be revealed in the sixth and final season of one of the smartest, most fearless shows network television has ever bothered to offer. Of course, this being “Lost,” we still have something to bitch about – namely, that the goddamn Olympics will interrupt the show’s final 18 episodes – but if we’ve waited this long to determine the ultimate fate of our favorite island castaways, what’s a few weeks of curling and cross-country skiing? We’ve all had our issues with the way “Lost” has unfolded over the years, and the show isn’t the phenomenon it was in its first couple of seasons. To cop one of the fall’s most popular phrases, though, this is it – and if there’s ever been a serialized drama with the guts to stick the landing and make its finale truly count, we’re betting it’s “Lost.” – Jeff Giles

Check out Bullz-Eye’s TV Power Rankings in their entirety by clicking here or on the big-arse graphic you see before you. Also, be sure to check out the accompanying interviews with folks associated with the various shows, including David Goyer (“FlashForward”), Kurt Sutter (“Sons of Anarchy”), Jonathan Ames (“Bored to Death”), and Bryan Cranston (“Breaking Bad”).

Did any of your favorite shows miss the cut? Let us know by replying below!

“Secret Girlfriend” is the latest series from Comedy Central, and it stars…you. Sort of.

I had no idea what to expect going in, other than what the network showed during its promos for the series. Basically, those were just quick-fire shots of hot women (Alexis Krause, Sara Fletcher) intercut with a couple of schlubby guys (Michael Blaiklock, Derek Miller).

The premise is this: you are part of the show. Your friends (Blaiklock and Miller), ex-girlfriend (Krause) and new girlfriend (Fletcher) all interact with you by talking directly to the camera, texting you via phone, or video chatting with you on your computer. Hijinks ensue.

The show is based on an internet series and was re-cast for television. After watching the premiere, I can safely say that I’ve never seen anything like this. It’s fast-paced, crass, and quite funny at times. Most guys will appreciate the constant barrage of sex that’s thrown at the viewer. In the first half hour, the main character sees his half-naked ex (twice), swims with a bunch of scantily clad women, holds an “audition” for some other scantily clad women, and goes to a strip club (twice).