The first 4.5 minutes of this awards video of Brad Bird’s extremely well deserved Windsor McKay Award from the Annies is pretty much your standard career retrospective about the former “Simpsons” creative turned writer/director of the instant classics, “The Iron Giant,” “The Incredibles,” and “Ratatouille.” In the second half, Bird himself appears. He’s presumably somewhere near the set of his live-action debut, the next “Mission: Impossible” installment, which will star Tom Cruise and Simon Pegg, among others.

The weird part is that he says he’s giving up animation forever, but then it gets weirder and more worrisome. 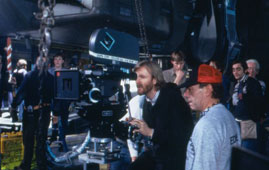