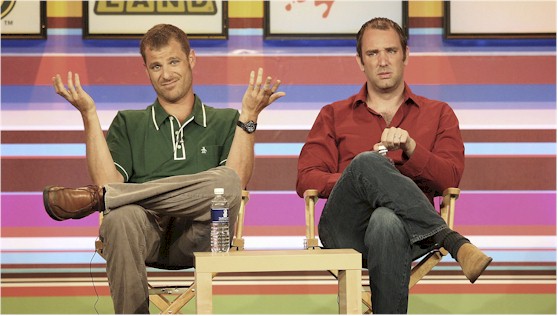 END_OF_DOCUMENT_TOKEN_TO_BE_REPLACED

In which “Basterd” week gets going (updated)

It wouldn’t be the week of a new Quentin Tarantino movie without a little controversy. Now esteemed critic, film historian, and occasional hair-up-his-keister provocateur (not that there’s anything wrong with that!) Jonathan Rosenbaum helpfully supplies it in discussing a Newsweek piece, comparing good ol’ QT to both Holocaust deniers and Sarah Palin in one short blog post. (H/t David Hudson.)

Unlike Rosenbaum, I haven’t seen the movie yet so I’ll withhold comment. However, my bias is obviously pretty pro-Tarantino and pro- not seeing it as some kind of dangerous revisionism. What’s one boldly ahistoric movie against thousands made before it? It’s not like Tarantino’s deleting them from Netflix. I also fail to see how Rosenbaum can even begin to speak for the reaction to the film of real-life Holocaust victims. It’s putting an awful lot of power on the movie to imagine it’s causing any real distress to them without some evidence.

I’m a pretty proud secular Jew myself, so I take the Holocaust seriously. At the same time, I take the sort of ownership some Jewish thinkers take over the history of what happened at the time, and how filmmakers deal with it, with a huge lack of seriousness. Some years back, Roberto Benigni’s Holocaust tearjerker, “Life is Beautiful,” started a different sort of controversy and I felt many took excessive offense. I was moved by the movie, almost despite myself, but I could certainly understand why a lot of people disliked it. However, the level of vituperation still puzzles me. I once listened to two well known Jewish critics verbally bludgeon a well-known Los Angeles rabbi for daring to speak well of the film on a local public radio station. What gave them to right to decide how the rabbi was allowed to react?

Many years before that, Mel Brooks took some heat for daring to make fun of Hitler in the original film of “The Producers.” Even the deadly serious, extremely well received, riveting and thought provoking historical drama “Downfall” worried some because it presenting the monstrous dictator as a human being. That was, I thought, deeply wrong. It’s crucial that we remember, always, that Hitler was as human as any of us lest we start to act as if we are beyond evil, a popular belief among the actually evil.

Of course, adding comedy to anything touching on the Holocaust is really asking for trouble from some quarters. I haven’t been able to dig up a review of “Downfall” by Rosenbaum online, but I wonder what Rosenbaum thinks of the “Downfall” subtitle Internet meme? Would he agree with the take offered below?

What does Hitler think of the Downfall meme? – watch more funny videos END_OF_DOCUMENT_TOKEN_TO_BE_REPLACED

Like we didn’t know this was inevitable from the moment Sarah Palin was announced as McCain’s running mate, but that didn’t make it any less funny…