Let’s get this monster party started

Yes, there is end of the week film news tonight/this morning I could talk about — a possible break in the long-running saga of MGM; a surprise presidential departure at Sony; and the disappointing news that the premier of “The Circus” was probably not visited by an aged, possibly cross-dressing time-traveler.  Nah. How could I possibly follow an interview with the director “Monster A-Go-Go” with anything remotely sensical? Time for a fairly random movie monster mash to get the Halloween weekend going.

And now Vincent Price, with a little help from John Carradine, gives a disturbing speech (what’s a “hume”?) and brings a disco spin to the actual “Monster Mash” from the movie…actually, I have no idea what movie this is from. Is this from a movie? Did I dream this?

And, remember, “only the weird zombies remain.”

Happy Halloween from the year 1971

I could go on and on and on about how stupid I think Kyle Smith’s attempted take-down of the entire Harry Potter series is. But, rather than go on at length with thoughts about how anyone who writes for the mendacious New York Post should think several times before discussing morality in culture, I’ll simply go with a Harry Potter-inspired fantasy movie moment I forgot to include over the weekend.

This one is from perhaps my favorite Roger Corman film, the relatively lavish 1963 B-picture, “The Raven.” Much more a comedy/dark fantasy than a horror film, and only tangentially related to the Edgar Allen Poe poem, it is written by the great horror/fantasy writer Richard Matheson (the novel I Am Legend, both the book and the film “Somewhere in Time,” and innumerable “Twilight Zone” episodes) and featured three of the true greats of old school horror typecasting: Boris Karloff, Vincent Price, and (sadly not featured in this video) Peter Lorre. An extremely young Jack Nicholson is also on hand in the kind of bland, male ingenue roles that helped him to consider writing as a career.

I guess this might be the closest the movies have come to Harry vs. Voldemort until the second “Harry Potter and the Deathly Hallow’s: Part II.” Of course, since I haven’t read the final Potter novel yet, for all I know they settle the whole thing on page 1 with card tricks and an applause meter.

I suppose that technically rock videos aren’t really movies in the sense of being a theatrical motion picture, but “Thriller” sure feels like a mini-movie, and it’s homages to classic horror — complete with a rap of sorts by Vincent Price — are still scary, even mixed with Michael Peter’s and Michael Jackson funky choreography. Undoubtedly a still strong piece of movie making by John Landis, and one of the late Mr. Jackson’s most important efforts,

I’ll be back with the box office numbers later today, and I’ll be wrapping up my coverage of the Los Angeles Film Festival, which ends tonight, over the next couple of days. 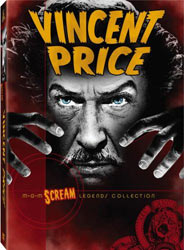 It’s a long scary day ’round my place, as I celebrate the final Scare of the Day for October by working my way through MGM’s awesome new box dedicated to that legendary scare-master, Vincent Price. I’ve actually been tackling one or two of these films as I’ve had the time, but I wanted to make sure they were all knocked out by the end of the day, so rather than wait ’til the wee hours to get this thing posted, I’m just going to update it as I go. I’ll make the acknowledgment right off the bat, however, that this is no way intended to be a comprehensive collection of all things Price; in fact, without even trying, I can think of half a dozen other horror films on his resume which are part of MGM’s Midnite Movies catalog. Does that mean we’ll get a “Volume 2” come next Halloween…? We can only hope.

Tales of Terror – Price found himself in the midst of Edgar Allan Poe adaptations plenty of times within his career, but few are more enjoyable than this trio of tales, directed and produced by the inestimable Roger Corman. 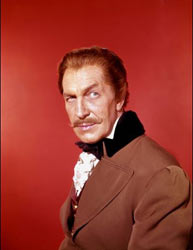 Though he’s teamed with Peter Lorre and Basil Rathbone in the second and third segments, respectively, it’s in the first – “Morella” – where Price is truly the star. He plays Locke, a man who has spent decades mourning the death of his wife, who died in childbirth. When Lenora, the child in question, returns home after an absence of many years, she’s shocked to find the family mansion in disarray and her father but a shadow of the man he once was; of course, she’s even more shocked when she finds that Daddy’s been keeping the decomposing corpse of Mommy lying around for all this time. Somehow, father and daughter manage to reconcile, but in the end, it’s Moms who gets the last laugh.

The best of the three segments is unquestionably “The Black Cat,” which finds Lorre taking the lead role as Montresor Herringbone, a drunken lout who proves that just because you’re a drunk and a lout doesn’t mean you can’t be a clever – and deadly – son of a bitch. The entire story is played far more for laughs than horror, but the final shot is gleefully gruesome. Lorre goes all out with his drunk routine, though he probably had little choice in the matter if he wanted to match Price’s vigorously slimy performance as Fortunato, a pretentious wine connoisseur who ends up sleeping with Herringbone’s wife, the gorgeous Annabel (played by the gorgeous Joyce Jameson); the scene where Herringbone and Fortunato have a wine taste-off is, in and of itself, worth owning the film…if not this entire box set.

Though “The Black Cat” inspires quite a few chuckles, “The Facts in the Case of M. Valdemar” leads one to believe that Corman prefers to leave his viewers screaming rather than laughing. Here, Price plays the title character, a dying man who decides to provide a mesmerist by the name of Carmichael (Rathbone) with the opportunity of a lifetime: to hypnotize him at the moment of his death, to see if his passing can be prolonged via hypnotic suggestion. The experiment proves only half-successful; Valdemar remains in a half-dead / half-alive state, where his body is gone but his mind lives on, trapped within the lifeless vessel. Valdemar’s wife, Helen (Deborah Paget), and his longtime friend, Dr. Elliot James, demand that Carmichael release his subject, but Carmichael refuses, calling it the opportunity of a lifetime, providing him with the chance to find out what lies beyond this plane of existence. (You will not be shocked to discover that Carmichael soon gets the chance to learn about it first hand.) Rathbone is good and evil in his role, and Price’s ghostly voiceover is suitably spooky, making for a nice and creepy finale to three consistently enjoyable scares.