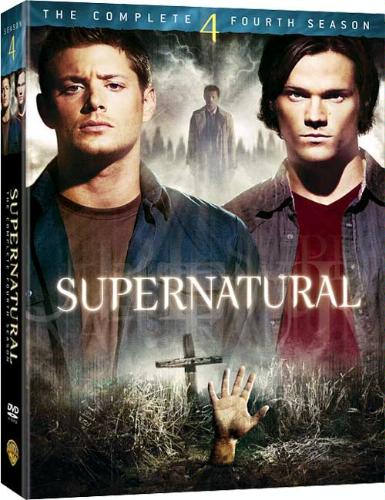 Most television shows start off hot and then get increasingly…um…less satisfying as time goes on. This is not the case with “Supernatural.” The series started off with a definite “freak of the week” vibe and didn’t spend much time on its season-long story arcs. While it has always had its quirky sense of humor and excellent chemistry between its two stars (Jared Padalecki and Jensen Ackles) the show didn’t thrive in its first season — it survived. But over the course of its second, third and now fourth seasons, “Supernatural” just keeps getting better and better.

This 22-episode season picks up as Dean (Ackles) is rescued from the unspeakable torture of Hell by an angel. He and Sam (Padalecki) are told that they have to stop a mega-powerful demon from breaking the seals that will bring about the Apocalypse (and the arrival of Lucifer). While they do go off on various weekly adventures, this season-long storyline is hanging over their heads the entire time. The pressure gets to Sam, who is tempted by the tremendous power growing inside of him, and this begins to divide the brothers. The season is as good as it sounds.

Unfortunately, I didn’t have the time to put together a list of my favorite television moments before the end of 2008, but that doesn’t mean I didn’t spend an inordinate amount of time in front of the tube. (Come to think of it, maybe my television addiction was the reason I didn’t have the free time to write about the best of 2008. Hmm.)

Anyway, here is a list of seven terrific shows that seem to be flying under the proverbial radar.

1. “True Blood” (HBO)
Alan Ball, the writer of “American Beauty” and the creator of “Six Feet Under,” brings us a series based on vampires in the Deep South. The series is based on Charlaine Harris’ Sookie Stackhouse series of books and stars Anna Paquin — whom I argued, under the moniker of Eli Cash a few years back, would have made a better Penny Lane than Kate Hudson — as a mind-reading waitress in a small town in Louisiana. The first season was excellent, though it got off to a bit of a slow start. Paquin is the key, but her best friend Tara (played by Rutina Wesley) often steals the show.

2. “Dexter” (Showtime)
Everyone’s favorite serial killer is back for a third season. Dexter Morgan works for the Miami Police Department as a blood splatter analyst and he spends his night hunting and killing the worst criminals in South Florida. This series has been excellent from the start, and shows no signs of slowing down. This season brought in Jimmy Smits as an Assistant District Attorney with a serious dark side. After “Six Feet Under,” I thought I’d always see Michael C. Hall as the openly gay David Fisher, but now I can’t imagine him as anyone other than the dark and secretive Dexter. 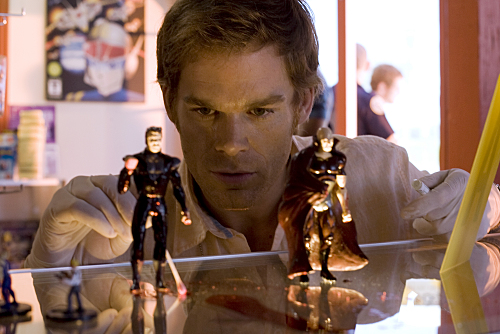 3. “It’s Always Sunny in Philadelphia” (FX)
Maybe this show just too crass to be mainstream, and thinking about it, that’s probably what makes it so great. “Sunny” really hit its stride in the third season, and the fourth season was even better. The show follows a group of friends (and Danny DeVito) that own a bar in Philadelphia. Every episode has its own completely ridiculous premise, but once you accept that every single character is a selfish, narcissistic moron, it becomes that much funnier. As far as sitcoms go, for me, the excellent fourth season put it in the same tier as “The Office,” “30 Rock,” “Weeds” and “Curb Your Enthusiasm,” and that’s some good company.

4. “Summer Heights High” (HBO)
Anyone who dug the U.K. version of “The Office” should check this series out. It’s an Australian mockumentary that follows three characters — the effeminate drama teacher Mr. G, the snotty private school transfer Ja’mie and the disruptive Tongan student Jonah — which are all played by the same actor, writer/creator Chris Lilley. Watching a grown man run around in a school dress is ridiculous, but that’s part of the fun. Lilley is extremely talented; it can’t be easy to morph into three very different characters every week. The humor is outrageous and the situations (especially involving the clueless Mr. G) can be David Brent-type awkward.

5. “Supernatural” (CW)
This sci-fi/fantasy series started off in typical “freak of the week” fashion with a different monster to defeat each week, but as it got into its third season, it really developed some serious, serialized chops. Now in its fourth year, the show continues to follow two brothers who are “hunters,” i.e. they fight all manner of evil — demons, vampires, ghosts, etc. Even in its first year, the show held my attention, but with all the happenings of the last two seasons, new episodes don’t sit on my TiVo for very long. Viewers who like sci-fi/fantasy should definitely check out “Supernatural.”

6. “The Unit” (CBS)
I think a lot of people write off “The Unit” as a typical CBS show like “CSI” or “NCIS” (or some other acronym), but as the show as worn on, it’s simply gotten better and better. The subject matter is ripe with storylines; the show follows members of a Special Forces unit (led by super-badass Jonas Blane, played wonderfully by Dennis Haysbert) and their families. A quick look at the production staff reveals a couple of big names — David Mamet (“The Untouchables,” “Glengarry Glen Ross”) and Shawn Ryan (“The Shield”) — that instantly give the show some serious credibility. Early on, the series could get a little “hooah!” and focus on the wives a bit too much, but the later seasons have struck the perfect balance between the professional and the personal.

7. “Brotherhood” (Showtime)
It doesn’t have as high of a profile as “The Sopranos” and maybe it’s not as addicting, but “Brotherhood” has the same feel and the same quality of writing. It follows two brothers in Providence, Rhode Island. One is a corrupt state congressman trying to do right by his family and the other is deeply involved in organized crime. Those that miss “The Sopranos” or “The Wire” should definitely rent the first season of “Brotherhood.”