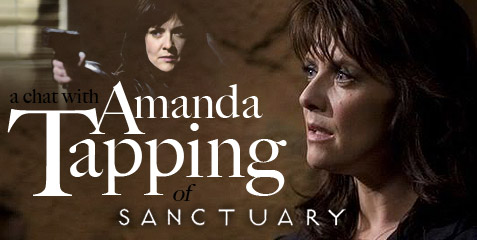 For all the cool TV/Web hybrids that broadband technology has hinted at, the history of entertainment crossing over from the Web to the boob tube is actually fairly short and grim. (Anyone remember the “quarterlife” TV series? No? Didn’t think so.) But there’s an exception to every rule, and so far, that exception is “Sanctuary,” the Web series-turned-Syfy Network hit. With the first season of “Sanctuary” arriving on DVD, Bullz-Eye’s Will Harris thought now would be a great time to talk to one of the show’s stars, Amanda Tapping.

With time served in the “Stargate” universe — Tapping debuted with the original “SG-1” series cast in 1997, and has stayed with her character ever since, bringing her over to “Stargate: Atlantis” — she’s definitely got the geek cred to draw an audience with the Syfy crowd, not to mention enough mojo to help make a Web phenomenon. And attracting all those eyeballs is what helped “Sanctuary” make the jump from monitor to screen so successfully. As Tapping tells us:

We made this kick-ass web series for a lot of money, and that was great, and we got a huge number of eyeballs watching it. 3 or 4 million people ended up watching the web series, I think, which created a huge amount of buzz. But we ultimately ran out of money, and we went, ‘Uh-oh, this is cool, but what now?’ But because of all the buzz we got, television networks started calling us, saying, ‘You know, it may not work on the web, but what about doing it as a TV series?

But even though “Sanctuary” is finding success, that doesn’t mean Tapping is done with “Stargate” — in fact, as she makes clear in the interview, she’s planning on popping up in “Stargate: Universe” soon. To read more about plans for her character — and for the second season of “Sanctuary” — click on the above image or follow this link!

A Chat with “Harper’s Island” Victim #8

See, I told you this week’s victim interview would be posted in a timely fashion.

If you’ve been watching “Harper’s Island” all along, then this was probably the least surprising death of the series to date. It’s not that you necessarily saw it coming this week, per se; it’s simply that, due to an event in an earlier episode, you sensed that the character had been living on borrowed time, anyway. And while I don’t want to say that I’d actually been rooting for that time to run out, I have to admit that this was an interview I’d been looking forward to, due to the other credits found within this person’s IMDb listing…one of which will be returning to the airwaves next month.

Oh, but I’ve said too much. Let’s move onward before I give away anything else…

END_OF_DOCUMENT_TOKEN_TO_BE_REPLACED

A Chat with Mitch Pileggi

You may know him as FBI Assistant Director Walter Skinner on “The X-Files” or, more recently, you may have thrilled to his recurring role on “Stargate: Atlantis” as Col. Steven Caldwell, but either way, if you’re a sci-fi fan, you probably recognize the face of Mitch Pileggi. Pileggi’s resume is wide and varied – he’s recently popped up FX’s “Sons of Anarchy,” has turned up on CBS’s “CSI” and “Cold Case,” and was a regular on ABC’s short-lived (but thoroughly brilliant) “Daybreak” – but now it’s The CW’s turn. After a one-off turn on “Reaper,” Pileggi has found his way onto a flashback episode of “Supernatural,” playing Sam and Dean’s grandfather. We spoke to Pileggi in conjunction with the episode, which airs on Oct. 2nd, which gave him the opportunity to praise the cast of that show, speak to the variety of work he’s done, and stand bemused at people’s fondness for his 1989 cinematic collaboration with Wes Craven.