What Else Ya Got? “Shorts”

For many people, “Shorts” will go down as one of the worst films of the year. I still don’t understand why someone as talented and resourceful as Robert Rodriguez wastes his time on such drivel, especially when he could be off making any movie he wanted. That won’t stop some parents from buying it for their kids, however, so let’s take a look at what else they’ll be getting in addition to the film. And no, the digital copy doesn’t count. 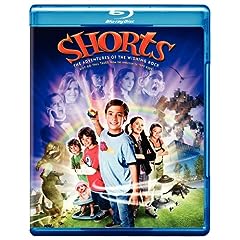 “The Magic of Short”

This making-of featurette takes a look at some of the behind-the-scenes tricks that went into creating the world of “Shorts,” from practical effects like the conjoined parent suit worn by Leslie Mann and Jon Cryer to designing a CG Booger Monster. Unfortunately, it’s not quite as long as it should be for a movie built entirely around visual effects, and it feels more like an afterthought than a genuine extra.

Running only five minutes, “Show and Tell” is a collection of interviews with the film’s child actors as shot by co-star Devon Gearhart. They all say a few words about their experience on the film, but it’s pretty dull stuff.

By far the best extra on all of Rodriguez’s films, the latest installment in the Ten-Minute Film School series is a bit of a letdown. This time around, he offers up advice on how to make your home movies more interesting with the addition of sound effects. Since that doesn’t really take ten minutes to do, he also shows footage of the home movie he made with his kids to pitch “Shorts” to the studios. If there’s anything to be learned from the lesson, though, it’s that just because your dad is a good director, it doesn’t mean you’ll be a good actor. Man, those kids are terrible.

Another DVD staple, this recipe neither creates the volcano it promises nor is very unique when compared to past offerings. It’s essentially just a chocolate chip cookie with a bunch of other stuff (like marshmallows and nuts) thrown in for the hell of it. Though his daughter Rhiannon adds some much needed comic relief, this is easily his worst Cooking School to date.

In fact, you could say the same for the Blu-ray itself. Though I didn’t expect very much from “Shorts,” I did expect more due to Rodriguez’s involvement. I guess I’ll have to lower my expectations the next time he decides to make another movie for his kids, because they’ve only gotten worse.