Another auto-post as I romp through the Happiest Place on Earth which, alas is not the Playboy Mansion, that’s the other and probably even better happiest place on earth. [Note: When I wrote that little crack I had no idea about Hef’s engagement. I guess 84 is when a boy decides it’s time to settle down.]

Moving along, below, it-boy and certain Oscar nominee James Franco teaches an important acting lesson to his brother, Dave, using a key scene from “Rebel Without a Cause.”

The funny part about this is that I used to think that the widespread assumption that poor old Pluto (Sal Mineo) was definitely and for sure non-platonically in love with Jim Stark (James Dean) was reading a bit more into things than was actually there in the film. Sure, I thought, Pluto might well be gay, but that wasn’t something we could be sure about from what was actually onscreen. I thought that people were making assumptions from our modern vantage point based on what we now know of the actual sex lives of Dean and Mineo. Okay, but then there’s the jacket cuddling and sniffing. Also, if Pluto’s so cold, why not just put it on rather than the childlike but kind of odd caresses? Also, he’s got a cardigan on and Dean/Stark just has an undershirt — and then he asks to keep it.  What would Dr. Freud make of my obtuseness? 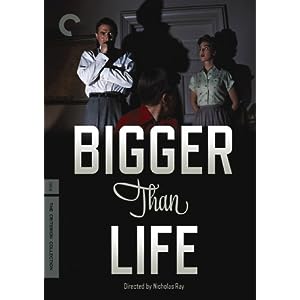 Director Nicholas Ray’s bombastic follow-up to “Rebel Without a Cause” failed in 1956, but has become a cinephile favorite despite being available only at museums and on Fox Movie Channel and TCM. Now presented fully restored and in a ultra-first-rate Criterion edition, film geeks may be entranced by Ray’s outlandish use of widescreen and color, but it also stands as one of the most profoundly emotional and disturbing of classic-era Hollywood melodramas.

James Mason (who also produced) stars as Ed Avery, a kindly suburban schoolteacher struck by a rare, painful, and deadly illness. The only path to survival is a new “wonder drug,” in this case cortisone, a steroid. In time, Avery seems recovered, except that he is slowly becoming a control-obsessed tyrant and drug addict with delusions of grander prone to increasingly extreme reactionary diatribes. Of course, his loving and too dutiful wife (Barbara Rush) and devoted young son (Christopher Olson) suffer. His health-obsessed P.E. teacher best friend (Walter Matthau, terrific in one of his earliest film roles) experiences some discomfort as well, but mid-fifties people were far more naive than we are now about science-driven “miracle cures.” “Bigger than Life” could have been called “Fascist With a Chemical Cause.” (Ray was the prototypical “Hollywood liberal.”) At heart, however, it is an exploration of the potential for madness underlying all family life and quite a baroque one. “Bigger Than Life” treats the potential dissolution of a family somewhat like sci-fi horror and, in this case, it kind of is.