Box Office Recap: It’s All the Same, Only the Names (from 3-10) have Changed Last week, two new releases, “Madgascar 3” and “Prometheus,” occupied the top two spots on the domestic box office charts for the first time since April 22, when “Think Like a Man” and “The Lucky One” knocked out “The Hunger Games” after four weeks on top. This weekend, something else that hadn’t happened in some time occurred: the nation’s two highest grossing movies remained static. “Madgascar 3” and “Prometheus” remain cemented at the top of the charts with $35.5 million and $20.2 million, respectively. The last films to accomplish that feat: “Mission: Impossible – Ghost Protocol” and “Sherlock Holmes: A Game of Shadows” over the last two weekends of 2011, Dec. 23-25 and Dec. 30-Jan. 1.

Hair metal musical “Rock of Ages” came in third place with $15 million. Now, I could make that sound like a lot by pointing out that’s the sixth best opening of all-time for a musical and the third highest for a film adapted from the stage. But let’s be frank here, given the film’s prime summer release date, huge release (it played in 74 more theaters than “Prometheus” did in its first week), and most importantly its star-studded cast, “Rock of Ages” was a supreme disappointment. Seriously, this is a film with names like Russell Brand, Paul Giamatti, Catherine Zeta-Jones, Malin Akerman, Mary J. Blige, Alec Baldwin, Bryan Cranston, Will Forte, Eli Roth and of course, Tom Cruise in its end credits. It should have made more money.

So what was the problem? Well, as I hypothesized in my Box Office Preview, nobody, and I mean nobody likes hair metal, the genre this film was banking on. Kids don’t like it, of that I can assure you, and baby boomers were the ones telling their children to turn that garbage down during the lost decade that was the 1980’s. As I said on Friday, the target audience here was the tiny sliver of the American population that was both a teenager during the 1980′s and enjoyed the crap at the top of the pop charts at the time.

All that showed in the demographics. For some reason, whoever keeps track of this stuff divides the entire population of the country into only two groups: above 25 and below 25. Nearly 75 percent of the audience for “Rock of Ages” was in the above category, and females made up 62 percent. Those numbers are staggeringly skewed.

Unsurprisingly, the demographics for the weekend’s other new release, Adam Sandler’s “That’s My Boy,” were distorted in the opposite direction. Sandler, of course, is known for his high-brow humor, stuff like “If peeing your pants is cool, consider me Miles Davis.” That’s sarcasm folks. Anyway, 52 percent of the comedy’s audience was under 25, and 54 percent was male. I know that doesn’t sound like much after what you just read, but in general, that’s not an insignificant skew towards teenage boys. “That’s My Boy” came in fifth place with $13 million.

The remainder of the chart offered few surprises. Sandwiched between the two new releases, “Snow White and the Huntsman” made $13.8 million, and “That’s My Boy” was followed by “Men in Black 3” and “The Avengers.”

Meanwhile, Wes Anderson’s “Moonrise Kingdom” continues to chug along at the specialty box office. With nearly $2.2 million, the film moved into ninth place this weekend despite being shown in just 178 theaters (compare that to Rock of Ages'” 3,470 and tenth place finisher “What to Expect When You’re Expecting’s” 1,216). 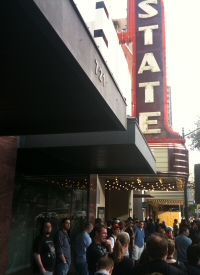