When it comes to movie classics, there is none more beloved than Victor Fleming’s 1939 musical, “The Wizard of Oz.” Based on the popular children’s book by L. Frank Baum, the film has been featured on numerous “best of” lists and continues to captivate people of all ages to this day. In celebration of its 70th anniversary, Warner Home Video is releasing the movie for the very first time in high definition in a special collector’s set designed exclusively for the hardcore “Oz” fan. This four-disc box set includes over 16 hours of bonus material, a 52-page commemorative book about the making of the film, a reproduction of the original 1939 campaign book, a replica of the film’s budget sheet, and a limited edition watch. 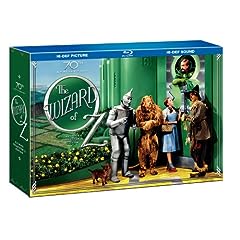 Of course, the main draw of the set is the film itself, and while many have logged complaints about the film’s new hi-def transfer following the one-night special engagement in theaters across the country, there’s no truth behind any of them. Though a movie as old as “The Wizard of Oz” is never going to look as pristine as one from the last decade, the hours of work that went into restoring the film for its Blu-ray debut can be appreciated the minute Leo the MGM Lion comes on screen. It’s not perfect, mind you, but when compared to the many reissues over the years, this version is hands down the best one yet. Colors pop off the screen without looking oversaturated, while the sepia-toned segments look sharper than ever.

As expected with a movie as legendary as “The Wizard of Oz,” Warner Bros. has crammed as many special features onto the four-disc set as possible — to the point that it’s almost overkill. Granted, one of those discs only contains a digital copy of the film, but the other three more than make up for it. Disc One features the movie, as well as a new audio commentary by “Oz” historian John Fricke and a sing-along track. The previously released TV special, “The Wonderful Wizard of Oz: The Making of a Movie Classic,” hosted by Angela Lansbury also appears, as do featurettes on music, costumes and production design (“The Art of Imagination”) and the legacy of the film (“Because of the Wonderful Things It Does”).

END_OF_DOCUMENT_TOKEN_TO_BE_REPLACED

This two-disc set is basically the agony and the ecstasy from the collected works of film critic/scholar turned boy wonder writer-director-actor Peter Bogdanovich. Placed in reverse chronological and quality order, Disc One is 1975’s agonizing “Nickelodeon,” one of a series of box office and/or critical failures that ended the young director’s early career hot streak. A forced slapstick comedy drawn very loosely from the silent era reminiscences of Hollywood greats Leo McCarey, Raoul Walsh and Allan Dwan, it’s a good-natured but entirely unfocused bore despite the strong efforts of an all-star cast led by Burt Reynolds and Ryan O’Neal, and featuring Tatum O’Neal (“Paper Moon”) and John Ritter (“Three’s Company”), among many others. The disc includes both a brand new black and white director’s cut alongside the original color theatrical version, but it will take more than the majesty of monochrome to save this one. Bogdanovich’s DVD commentary provides better movie history and better entertainment.

“The Last Picture Show” is, of course, something completely different. On his second feature, Bogdanovich blew the 1971’s cinema world’s collective mind and drew comparisons to his friend and mentor, Orson Welles, with this crisply wrought black and white adaptation of an early Larry McMurtry novel. Nominated for eight Academy Awards, it details the late teen years of two high school football players (Timothy Bottoms and Jeff Bridges) and a manipulative beauty (Cybill Shepherd) following in the footsteps of her unfaithful mother (Ellen Burstyn) in a rapidly dying Texas town. A minor cause celebre at the time because of its nudity and blunt sexuality, its glory is its acute visual storytelling and Robert Surtees’ masterful photography, a biting and heartbreaking script, and a large number of genuinely tremendous supporting performances. In particular, Cloris Leachman as a deeply lonely housewife who falls for a high school boy and Western mainstay Ben Johnson (“The Wild Bunch,” “Wagon Master”) as the charismatic walking embodiment of the town, Sam the Lion, won entirely deserved supporting acting awards. A sardonic yet humanistic exploration of fractured relationships and poor choices, it remains a riveting and moving work of cutting edge movie-making from a true cinematic reactionary.

Click to buy “Nickelodeon” and “The Last Picture Show”