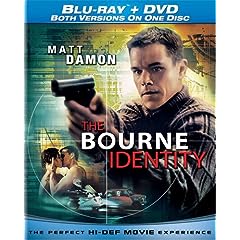 One of the problems that people have with the adoption of a new format (most recently, Blu-ray) is that the format in question isn’t universal, sometimes even within a single household. For example, a family might have a Blu-ray player in the living room, but still have DVD players elsewhere in the house (or in the minivan). Universal Studios Home Entertainment has addressed this problem by releasing dual-format discs that have a Blu-ray version of the movie on one side and a DVD version on the other, allowing consumers to use the disc anywhere they can play Blu-ray or DVD. Consumers that haven’t yet adopted the Blu-ray format can buy these discs knowing that their collection will be ready when they eventually do. It’s an ingenious idea for those in the process of switching over to Blu-ray.

The so-called “flipper” discs debut with the Jason Bourne series: “The Bourne Identity,” “The Bourne Supremacy,” and (the not available for review) “The Bourne Ultimatum.” [Read the Bullz-Eye review of the trilogy.]

This should go without saying, but the picture quality of the Blu-ray version is unparalleled. When watched in 1080p, the films look about as good as they can possibly look, at least at this point in time. For example, in one of the Zurich scenes in “The Bourne Identity,” little details like falling snow really jump out.

“The Bourne Identity” features a load of special features, including U-Control (allowing the viewer to examine character dossiers, location analyses and spy gadgets while watching the movie), a Bourne card strategy game, BD-Live (allowing BR and PS3 users chat with friends and family while watching the film), deleted and extended scenes, an alternate opening and ending, along with a series of featurettes: “The Bourne Mastermind: Robert Ludlum,” an interview with Tony Gilroy about the challenges of adapting Ludlum’s book for the silver screen, interviews with Matt Damon and Franka Potente, an interview with a UCLA psychologist about the Bourne’s amnesia, an interview with CIA liaison officer Chase Brandon about the real-world making of a super spy, a look into the making of a fight sequence, and feature commentary with director Doug Liman.

“The Bourne Supremacy” bonus features include U-Control (picture in picture, Bourne dossier, Bourne orientation), BD-Live, deleted scenes (including an alternate ending), and featurettes about the casting of the principal characters, how Paul Greengrass was chosen as director, the demolition of a suburban home in Munich, on location in Berlin, Moscow and Goa (India), Damon’s fight training, the Moscow chase scene, the bridge chase scene, Josh Powell and the film’s score, a profile on Robert Ludlum, and a psychological diagnosis of Jason Bourne.

Indie awards, viscera in your lap, and the boredom of Alec

* If you’re looking for any clear Oscar indications from today’s indie awards news, you might want to look elsewhere. “Precious” and “The Last Station” — which I’ve been reading very mixed things about so far — were among the films to make a nominations splash with The Independent Spirit Awards.  Meanwhile, the Gotham Awards were held last night and “The Hurt Locker” “swept” things — well, it won two big awards including Best Picture. Close enough. (Kathryn Bigelow’s wartime thriller, a favorite of many, was not eligible for the Spirit Awards this year, but only got a pair of acting nominations last year.)

* There’s something in the air about gross-outs in 3-D today. First, comes news that sequels to both “Zombieland” and, lord help us all, “Jackass,” are planned in the suddenly semi-ubiquitous format because what the world needs now is projectile cow semen in three dimensions. That’s not all, a new remake of George Romero’s seminal “Night of the Living Dead” will be in 3-D digital animation, which actually renders things less gross and scary — to me, anyhow and that’s just fine for this disliker of gross-outs.

By the way, this is will be the third remake of the film and the second in 3-D, though the 2006 attempt seems a bit less classy. I actually like the idea of taking an epic tack with a variation of the original film, but I just hope Romero gets at least a small piece of the action. (In one of the strangest foul-ups in movie history, the original flesh-eating zombie flick fell into the public domain back in 1968. So, anyone who wants to may legally do their own rip-off.)

Meanwhile, jolly Carl DiOrio is here to tell us that the growth of 3-D films will be gradual and mostly limited to genre and concert films for the time being. Good to know.

* Paul Greengrass confirms his “Bourne 4” directorial exit as reported yesterday, but says the divorce is highly amicable, though the fate of the project seems in doubt and, yeah, I’m not sure we really need a fourth outing, either. On the other hand, Bourne fans can protect themselves against speedy video obsolescence on the three films already out early next year. Here come: “flipper discs.”