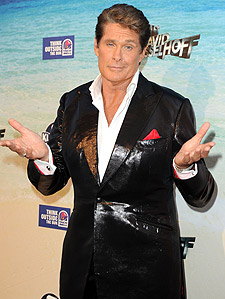 A Chat with Christy Karacas and Stephen Warbrick (“Superjail!”)

Trying to pin down the strangest series amongst Cartoon Network’s Adult Swim line-up is a fool’s errand. This, after all, is where a show about a crime-fighting Happy Meal can thrive for seven seasons, so it’s clear that anything goes, and then some. But absurdist comedy about talking food and drink is one thing. “Superjail!” is quite another. When Bullz-Eye was offered the opportunity to chat with two of the show’s executive producers, Christy Karacas and Stephen Warbrick, we couldn’t resist taking them up on their offer, if only so we could get at least a small hint of what kind of guys would create a show as insane as this one.

SW: I don’t know if there’s too much differential between our voices.

BE: I think I’ll get the hang of it after I get talking to you guys.

BE: Nice. That’ll definitely help. Well, I’m definitely a fan of the show…

BE: Now, I understand that “Superjail!” originated – indirectly, anyway – as a result of a short you guys did called “Barfight.” Is it true that it was just a case of one of your friends passing it on to someone at Cartoon Network?

SW: I don’t even remember. (Laughs)

CK: But, yeah, for a couple of years, it was just floating around, and our buddy Dave Hughes, one of the editors on it, worked at Adult Swim and showed it to them, and they got in touch with us and were, like, “Hey, why don’t you try pitching a show here?” So that was pretty awesome.

BE: Well, it’s definitely the kind of show where you just absolutely do not know what’s going to come next.

SW: Well, that’s good. We try to keep you on your toes. (Laughs)

BE: But how do you approach writing an episode of the show? I mean, do you just take a general premise and then go completely apeshit from there?

SW: Yeah, we’ll definitely have one general premise, and then try to build maybe one or two smaller subplots off of that, and then just go from there and keep adding and subtracting things until it feels right. And then you’ve got to get it approved, and that’s a whole different thing. (Laughs)

BE: Given what I’ve seen in there, I have to wonder what wasn’t approved at various times.

CK: It’s usually weird copyright things, like, “Oh, that’s a name of something,” or stuff like that, which is really surprising. We thought we were going to get really censored, but they’ve actually been pretty cool about encouraging us to push it.