I’m not quite sure I did the great Boris Karloff justice with the clip I selected earlier this evening. Below, therefore, I’m putting some later career highlights of the great character actor who managed to play some of the nastiest monsters and villains of his era in innumerable films while also being considered one of the nicest guys in Hollywood. (Apparently that little girl he threw in the lake in “Bride of Frankenstein” couldn’t get enough of him, even in full monster make-up.)

First, some of Karloff’s very cool introductory remarks from Mario Bava’s multistory horror flick, “Black Sabbath” — which not only gave Ozzy Osbourne’s seminal heavy metal its name but also was reportedly part of the inspiration, structurally at least, for “Pulp Fiction.”

More videos after the flip!

END_OF_DOCUMENT_TOKEN_TO_BE_REPLACED

A few items as Hollywood finishes digesting its turkey and stuffing.

* Paramount has picked up “Area 51,” the science fiction follow-up to the ridiculously profitable “Paranormal Activity” from writer-director Oren Peli. Somewhat to my disappointment, this one will also use the “found footage” gimmick, though I guess we can assume that with an exponentially larger budget — $5 million (about enough to pay for craft services on some films) as opposed to $15,000 — Peli will at least attempt to spread his wings creatively. One reason to give him props, however, is that the film has already wrapped principal photography. We can’t accuse the Israel-born former video game designer of failing to strike while the iron’s hot! 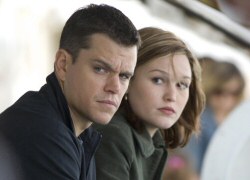 * It appears that The Playlist broke the story that it appears that the very talented Paul Greengrass has left the helm of “Bourne 4” and if he goes, Matt Damon may not be far behind. Still, at this point it’s a tale without an ending in more ways than one

* Kim Masters considers “Avatar” and Robert Zemeckis’s motion capture and 3-D work as featured currently in “A Christmas Carol.” To me, they’re creatively too different beasts in that James Cameron‘s creations aren’t trying so hard to be realistic, which I think is the real reason for the “ugly” problem with the creator of Roger Rabbit’s more recent work. As for the “Avatar” characters, I’m not sure I’m going to love them yet, either, but we’ll see when the movie’s out. I’m also not at all sure that movies need to be revolutionized in quite this way.

* Over at Film Threat, Gary Morris of the highbrowish Bright Lights Film Journal is interviewed. Among the topics: interviews like this one. Don’t fear the meta. (H/t The Auteurs on Twitter.)

* It technically ended yesterday, but the Boris Karloff Blogathon, hosted where else but at Frankensteinia, lives on with tons of material still coming in submitted by innumerable bloggers about the late, great character actor who originated the role of Frankenstein’s monster in 1931. Definitely worth many looks.

The vocal there is quite obviously reconstructed using the original recording by Bobby “Boris” Pickett. If you want to hear the actual vocal from the 1965 episode of “Shindig” featuring the real Boris Karloff, you may hear it here.