Bill Hicks has become the trendy name to drop of late when talking about influential comics, and while it’s irritating to see Hicks become a hipster icon, the simple fact is that it’s better late than never for Hicks to find a larger audience, hipster cred or otherwise. Truthfully, it’s not surprising that Hicks didn’t find a larger audience during his lifetime; his material, while rooted in truth, was sardonic and mean. He spoke at length about pornography and fantasized about being an angel of death. He also brewed up material that a million comics wish they had thought of. Using terminally ill people as stuntmen in movies? Genius. Unconscionable, but genius.

This four-disc set (two CDs, two DVDs, one download card) tries valiantly to create some order from the chaos that was Hicks’ brain, saving the political material for Disc 2 and using Disc 1 to talk about everything else. A chronological sequencing probably would have worked better, for two reasons: it would give the unfamiliar a better sense of how Hicks’ material evolved, and it would get the listener more excited as they go through it simply because Hicks is playing to bigger and bigger crowds. Several of these tracks are marked ‘Previously unreleased,’ but many of those are just different versions of bits that appeared on the albums Ryko issued in the late ’90s and early ’00s. There really isn’t a duff bit here, and they even had the balls to include “Worst Audience Ever,” where Hicks ran into a particularly stoic crowd in Pennsylvania, and made sure they knew it.

Fans will want this collection for the DVD material. Disc 1 contains some early (as in 1981, when Hicks was 19 years old) routines, mostly recorded at the Comix Annex in Houston. Hicks was still finding his voice during this period, and for a show in Indianapolis in 1985, it looks as though Hicks’ new idol was Steven Wright, as he delivers his material in a monotone voice. (He’s also wearing a news boy cap, just like his friend Sam Kinison.) The material he had written then wasn’t great, but it’s still interesting to see what stuff he went through before he settled on talking about Jimi Hendrix cutting Debbie Gibson in half with his cock. And speaking of Kinison, one of the two Houston gigs from 1986 literally screams Kinison, from the constant yelling to the trench coat. The money piece from Disc 1 is the poolside interview with Hicks from 1988, where he speaks of Kinison’s permanent banning from a local comedy club, inspiring the birth of the Outlaws.

Disc 2 features the rare “Ninja Bachelor Party,” a delightfully silly 30-minute martial arts spoof film Hicks shot over a period of eight years, along with a series of bootleg clips of Hicks in Austin in the early ’90s. The bootlegs are just that, shot from the back of the room and frequently out of focus, but it also features the best material on either DVD, and it’s fun to see the Relentless and Arizona Bay material acted out. It doesn’t quite serve as the definitive collection of Hicks’ work, but it’s not called The Definitive Collection. It’s The Essential Collection, meaning it’s all must-own stuff. Just be prepared to seek out the rest of Hicks’ essential material. 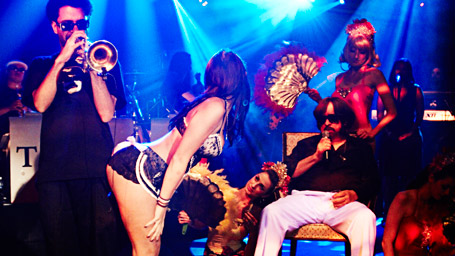