Bob & David: will there be a tour?

During the Winter TCA Tour in January 2010, I had a chance to talk to Bob Odenkirk about his work on “Breaking Bad,” but before our conversation was over, I had to ask the question that I knew “Mr. Show” fans – and I include myself in that number – were chomping at the bit to have answered: is there still a chance that Bob and his longtime cohort David Cross would work together again. 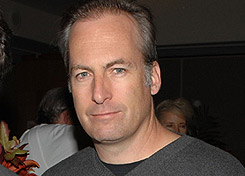 “Oh, yeah, we’re going to do something together,” Bob assured me. “Absolutely. There is no question. We started writing a live show two weeks ago when he was here. We want to do another live show. Maybe in a year or a year and a half. My kids are older now so I can leave, so we can do a live tour. It’ll be really fun, yeah.”

In early August, during the Summer TCA Tour, I was fortunate enough to run into David, busy promoting his new IFC series, “The Increasingly Poor Decisions of Todd Margaret.” Not one to miss a chance for an update, I told him what Bob had said in January, and I asked for an update. 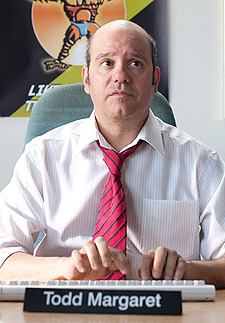 “See, I have very little responsibilities outside of a dog,” explained David. “But (Bob) has two kids and a wife. And, also, he has no balls. So when you combine all those things, it’s not good. But I put together a calendar for a way we could do a tour in which he would make money, he would be able to go home…I can’t remember offhand, but I think he would be able to go home for four days every ten days, or something like that.

“It would be a six-week tour, and I said, ‘Here, present this to whoever needs to sign off on it.’ I was, like, ‘You can’t ask for better than this. We’re going to suffer. We’re not going to make as much money, and we’re going to be away longer than we normally would be, but it’s in order to make it so that you can go home and so that these things that you need to address are addressed satisfactorily.’ I would love to do it. I am not the guy holding up the tour. It’s not me.”

Time to drop a line back to the Odenkirk camp. 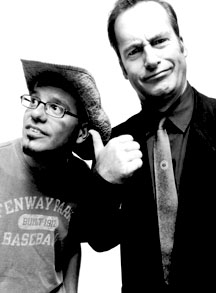 “I love David Cross,” Bob assured me by E-mail once he’d read David’s comments. “I think he’s funny and I consider him one of my best friends. But, sadly, he’s a liar. He is the one with family…two of ’em – but don’t tell either about the other!

“Plus, he claims to have Philatellaphobia – the fear of collecting stamps, which he claims keeps him stuck in the basement of his house, quaking and pooping. I would love to tour. I am standing outside my bachelor condo right now with a packed bag and a stash bag for my cocaine fixes. Oh, and I have no balls.”

So if both Bob and David are both claiming to be ready, does that mean that the tour is a go?

Hell, your guess is as good as mine. But at the very least, we’re getting some good comedy out of the discussion process.

In the meantime, though, enjoy this look back at the Bob and David experience before there even was a “Mr. Show,” and let us keep our fingers crossed that we’ll see them on a stage again in the very near future.