After last week’s fantastic selection of Blu-ray titles, you’d think that we’d have to wait another month or two before getting anything even remotely as good, but for fans of sci-fi, you really can’t do much better than today’s offering. There are no less than six geek-worthy Blu-rays this week, as well as a few other major titles definitely worthy of a spot in your collection. 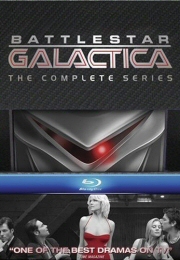 Okay, so I may have never actually watched “Battlestar Galactica” (save for the pilot/miniseries), but it’s one of those shows that I’ve been meaning to check out for quite awhile. And with the release of the complete series box set, what better time than now? This is the first time the show has been available on Blu-ray, and thanks to the fact that it’s actually shot in HD (though not broadcast that way, curiously enough) old and new fans alike can finally enjoy the show as it was meant to be seen. The included extras are mostly a retread of previously released bonus material, but Blu-ray owners do get a few exclusives, like picture-in-picture video and a pop-up encyclopedia. The series is housed in a sweet metallic cube that expands to reveal all four seasons and includes your very own frakkin’ toaster figurine. Even if you’re not a fan of the series, that’s pretty hard to resist. 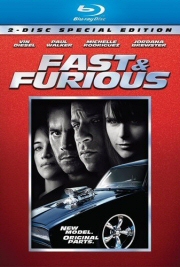 I don’t care how you may feel about the fourth installment of the popular car porn franchise, or even the series as a whole, because Universal has delivered yet another fine Blu-ray packed with just about everything you could hope for. Personally, I thought the movie was good mindless fund, but I know that a lot of people found it silly and contrived. Fair enough, but for those of you who did enjoy it, the double-disc effort includes a director commentary, stunt featurettes and even a cool Vin Diesel-directed short film that acts as a prequel to the movie. Of course, the real highlight is the Take Control feature, which offers an in-depth look at the film hosted by Justin Lin and Paul Walker. Though it’s only activated for the bigger sequences, it enables the filmmakers to go into further detail than the typical commentary track. Lin pauses, rewinds and fast-forwards his way through key moments, highlighting things with the help of storyboards and behind-the-scenes footage. Zack Snyder may have technically beaten everyone to the punch with a similar feature on the “Watchmen” Blu-ray, but it’s just good to see that Warner Bros. isn’t the only studio looking ahead. This is the future of the HD format.

Much like their friendly competitors, DC Comics’ animated film division has taken some time to find its groove, but with the release of “Green Lantern: First Flight,” they’ve made their best direct-to-DVD movie yet. Green Lantern might not have the same mainstream appeal of Superman, Batman, or even Wonder Woman, but just like Marvel’s Iron Man, the second-tier superhero is actually one of the best characters in the DC universe. Choosing to stick with the classic Hal Jordan version for this go-round, “First Flight” finds the wise-cracking test pilot recruited by the Guardians of the Universe. Assigned to train under Sinestro (whose name alone invokes images of, well, sinister-ness), Hal must eventually prove himself worthy of the Green Lantern ring by defeating his evil mentor and saving the world. As fans of the DC Universe movies have come to expect, the voice talent is solid, the animation is sharp, and the included special features are actually worth watching. What ultimately makes “Green Lantern: First Flight” a step above the best, however, is that the story is actually quite good, and with a live-action movie on the way, the filmmakers would be wise to take notes.