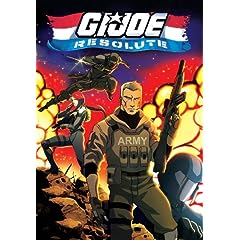 Now that everyone’s had the chance to see it for themselves, it’s probably safe to say that “G.I. Joe: The Rise of Cobra” was a bit of a disappointment. If there’s any good that came out of the summer blockbuster, however, it’s “G.I. Joe: Resolute,” the online animated series produced in conjunction with the film’s theatrical release. Written by comic legend Warren Ellis, “Resolute” takes a decidedly more mature approach with the “G.I. Joe” franchise in both story and tone. The set-up is still the same – Cobra Commander has stolen some kind of top-secret device and the Joes have to stop him before he uses it to take over the world – but it doesn’t feel nearly as cheesy as usual. There’s also a cool subplot involving Snake Eyes and Storm Shadow that dives into their backstory, while all of the usual suspects make some kind of appearance. It would have made for a great TV pilot if so many major characters didn’t die, but although it’s something that most fans would probably enjoy, “G.I. Joe: Resolute” is simply too short to warrant its $13 price tag. Paramount would have been better off including this on the recent DVD release of “The Rise of Cobra,” because then at least there’d be something worth watching on the disc.