Weekend box office: In which we separate the men from the boys, and women from both

If we are to believe the prognosticators this weekend, testosterone will rule in a weekend which could turn out to be the most exciting movie three-way showdown since the climax of “The Good, the Bad, and the Ugly.” The impression is that it really does threaten to send the genders, and possibly even the generations, on their separate ways at the nation’s multiplexes.

Of course, when I speak movies of aimed at us penile-Americans, I speak of the R-rated mega-macho ultraviolent action fest, “The Expendables.” The ensemble-action flick is directed, cowritten and co-starring Sylvester Stallone and features Jason Statham, Jet Li, Dolph Lundgren, Mickey Rourke, and assorted other manly men who are masculine males in supporting roles and cameos.

Cinema prognosticators Ben Fritz and good old jolly Carl DiOrio seem to think this movie will easily take the top spot for Lionsgate to the tune of about $30-35 million with its appeal to males of all ages. Critics, for the most part, aren’t overly impressed, though a sizeable enough minority are treating the film as a campy, action-packed good time. For me, Stallone’s career peaked 35 years ago with his hilarious performance in “Death Race 2000” — “Rocky” has never done much for me and “Rambo: First Blood 2” did even less — but I still might be checking this one out at some point. I do have an affection for the ensemble action film genre. If you do as well, you might want to check out the salute to the sturdy sub-genre posted over at the Bullz-Eye blog. 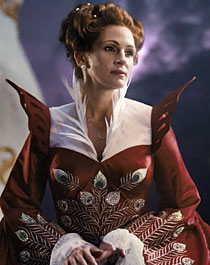 For the more femininely chromosomed, this week’s big draw is supposed to be “Eat Pray Love” from director Ryan Murphy, best known as the creator of TV’s “Glee” and “Nip/Tuck,” and starring an actress you may remember named Julia Roberts. It’s an adaptation of a memoir about a divorced woman going on a worldwide physical and spiritual “journey of self-realization.”  I don’t know about you but when I hear “self-realization” and especially “journey of self-realization” I check out completely. I don’t think that’ s just because I’m male.

While I haven’t seen a single episode of Murphy’s shows, I gather he is associated with a certain degree of offbeat innovation and has clearly touched a nerve on two on the small screen. That doesn’t seem to have translated into much interest from film critics, however, who are mostly kind of unimpressed. Rated PG-13, “Eat Pray Love” does seem to be doing a bit better critically than his poorly received prior adaptation of a hit memoir, “Running with Scissors.” Jolly Carl expects to film to hit the #2 spot with an amount somewhere over $20 million.

And then comes what I hope may be this weekend’s wild card. The consensus seems to be that, despite a torrent of Internet publicity and huge geek buzz, Edgar Wright’s comic book adaptation, “Scott Pilgrim vs. the World,” will be lucky to get much over $15 million which, for a movie costing about $65 million, isn’t great. Though reviews initially looked as they might be “middling,” they are actually shaping up as rather excellent for a film that risks alienating a certain percentage of its audience with its blatantly video-game derived comic book/manga aesthetic. The consensus being that, as with the highly entertaining “Kick-Ass” before it, geek awareness and mass audience acceptance just are not the same thing and it’s entirely likely this will come in the #4 spot behind last week’s #1 film, “The Other Guys.”

I’m sure there’s a good chance this will happen. However,  “Scott Pilgrim” seems to me to be a film that, at least over the long haul, has a potentially much wider audience than some other films because of it’s unusual combination of relationship-driven and action-comedy. The fact that, as a young skewing film, it’s PG-13 but also relatively racy in its advertisements might not hurt either. Not to be put in the position of defending a film I haven’t seen and pre-release online mini-backlash notwithstanding,  there is one thing I feel sure about. In a few years, the new movie from this weekend that people will still be talking about is “Pilgrim.”

Actually, that’s perhaps not entirely true because there’s also a very interesting new film debuting in very limited release, and this one I did see a couple of months at the L.A. Film Festival. “Animal Kingdom” is an imperfect but highly assured debut from Australian first-time writer-director David Michôd. Though a bit overly dour and slack in the middle, to the point where it very nearly lost me, it’s one of the best crime films I’ve seen in a while with a real doozy of a last act. It’s opening on just small four screens but with a couple of brilliant bad-guy-and-gal performances, this is one I think you’ll be hearing about later on.