Vampires are often painted as dark, sinister characters with a penchant for gothic fashion and a taste for blood that can never be fully quenched. Granted, their nature doesn’t necessarily lend itself to being a laugh riot, but once in a while, we’re gifted with bloodsuckers who can see the funny side of their affliction…or if they can’t, then at least the viewers can. (For instance, “True Blood” sure as hell isn’t a comedy, but if you caught the Season 2 premiere, you saw a truly hilarious scene where a new vampire took a blood taste test to determine which type she prefers.) Bullz-Eye decided to take a trip back through the mists of time to reinvestigate some of the more comedic explorations into the curse of vampirism, skipping over a couple of ostensible classics – neither “The Lost Boys” nor “From Dusk ‘Til Dawn” are here – in favor of some interesting obscurities that may not have crossed your radar. 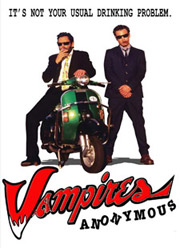 “Vampires Anonymous” (2003) – A few years ago, Bullz-Eye chatted with Michael Madsen about how many of his films end up going to DVD, and he explained the situation thusly: “People will promise you the fucking world, they’ll promise you anything to get you in the movie…and then, seven times out of ten, it’s not that way.” Although Madsen only has a small role in “Vampires Anonymous,” we like to think that he’s at least relatively pleased with this small obscurity from his resume. Vic Weller (Paul Popowich) is a vampire who’s found himself unable to curb his urges, so he calls up the organization known as Vampires Anonymous, which quickly finds him a new location in a small North Carolina town, where he can feel free to gorge himself on sheep until he gets into the habit of staying clean of human blood. Predictably, he falls in love with a local girl (Carolyn Lawrence) and has to keep his murderous nature in check around her, even though he has feelings for her. A bearded Madsen plays Geno, Vic’s sponsor in VampAnon, who’s never more than a phone call away, even though he’s usually pretty grumpy with his charge. (“I was not aware that I was wearing my Mr. Know-It-All hat today.”) It’s not a consistently hilarious flick, and the recurring gag about redneck “sheep shaggers” may make you feel queasy, but Madsen’s always good for a laugh, and the VampAnon meetings and 12-step title cards are funny enough to make you imagine the possibilities of a sitcom based around the organization.

Surely this one bite hasn’t fully sated your appetite for vampiric comedy, so why not head over to Bullz-Eye and check out the full piece by clicking either here or on the image below?

Oh, and just as a bonus, here’s a trailer for one of the films that didn’t make the cut. Believe us, with Dean Cameron – best known as Chainsaw in “Summer School” – playing the titular character and a supporting cast which includes Toni Basil, Bo Diddley, and Thomas Dolby, we really, really wanted to include it, but we just couldn’t get our hands on a copy in time to do so…and after watching this trailer, we just can’t imagine we could do the film justice without seeing every last second of it.