What Else Ya Got? “RocknRolla”

After considerably scaling back the U.S. release of “RocknRolla” to a mere 826 screens (most wide releases get 2500+) because it was deemed to be “too British,” Warner Bros. has reasserted its indifference with the film with a single-disc Blu-ray that isn’t necessarily terrible, but could have been much better.

“Audio Commentary”
Guy Ritchie and Mark Strong aren’t exactly two of the most outspoken guys in the business, but I respect them for their individual contributions to cinema. Their discussion on the film might not be as riveting as some had hoped, but it’s still a solid commentary with nary a quiet moment. Strong is very enamored with Ritchie’s latest film, while the writer/director plays the humble card most of the way through. 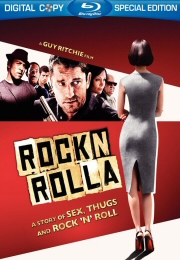 “Will You Put the Cigarette Out?”
A single deleted scene featuring One Two (Gerard Butler) running on a treadmill while some old guy smokes in his face and Mumbles (Idris Elba) runs his mouth. Not exactly exhilarating stuff, but we’ll take what we can get.

“Blokes, Birds and Backhands”
Some reviewers have called out this making-of featurette for leaning more towards the EPK side, but though it’s mostly promotional fluff about the characters and the story, the interviews with are still enjoyable. Plus, a few tidbits are dropped along the way, the most interesting of which is that the “sex scene” between Butler and Thandie Newton was completely improvised on the day. Originally intended to be a passionate kissing scene between the two actors, Newton begged Ritchie to change it when Butler arrived on set with a nasty cold. Oddly enough, the scene actually works better than it would have as a boring kissing scene, so kudos to bacteria.

“Guy’s Town”
A location featurette about all of the different London hotspots used during filming (including a yet-to-be-opened Wembley Stadium), this 8-minute extra also skews a little towards the promotional side, but it’s still a nice addition to the set.

All in all, this will probably be a bit of a disappointment for fans of Ritchie’s films. With only a couple of extras to choose from and a digital copy to load on to your mobile entertainment player of choice, “RocknRolla” is just begging for a much-improved double dip in the future. Unfortunately, the chances of that happening are about as good as Guy Ritchie becoming the next Prime Minister, so don’t hold your breath.