END_OF_DOCUMENT_TOKEN_TO_BE_REPLACED

In celebration of its 50th anniversary, GQ recently launched an online contest asking readers to vote for their favorite covers, spanning a wide range of categories and going as far back as the magazine’s debut year. 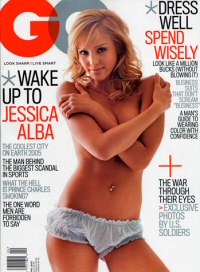 Voting has officially opened on the final to determine the best cover of all-time, and not surprisingly, Jessica Alba has already secured a massive lead. One glance at the image to the right and you’ve no doubt already rushed to the bathroom with Kleenex in hand, but it’s not over yet, and as soon as female voters realize they’re simply canceling out each other’s votes amongst the four male candidates, Brad Pitt will certainly gain some ground.

Check out the other finalists below, and then head to GQ to vote.