Liza’s at the Palace 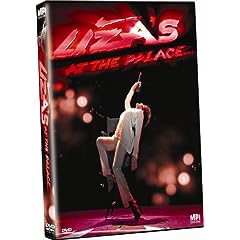 Early on, Liza Minnelli did a fantastic job of making the world forget her “somewhat famous” parents. In Bob Fosse’s 1972 film version of “Cabaret” and in “Liza with a ‘Z’,” the TV variety special he put together for her, she proved herself a first-rate actress, singer, and dancer with a humorous, gently ironic style all her own. Despite solid acting performances in numerous movies and TV shows since, her overall career trajectory since has been, of course, difficult.

In 2008, Minnelli regained her diva status with a critically acclaimed concert/theatrical performance, “Liza’s at the Palace,” which incorporates a recreation of the legendary nightclub act of her multi-talented godmother, Kay Thompson (“Funny Face“). Taped before an adoring, celebrity-studded audience at the MGM Grand in Las Vegas, this late 2009 performance is sure to please hardcore fans. For some, however, it will be painful to watch, for all the pizazz. It’s not that age, illness and all the rest have taken their toll on Minnelli’s almost too powerful voice, nor would any sane viewer expect her to dance like it’s still 1972. Her commitment remains undeniably powerful. The problem lay elsewhere. For all her attempts to tell a personal story, Minnelli’s style when communicating through song or spoken word has become — and I don’t know how else to say this — bizarrely phony and off-putting. It’s one thing for a second-generation powerhouse performer to have show business in her blood, it’s another thing when nothing else appears to be in it.