Many a sitcom has driven viewers mad with the plot device known as “will they or won’t they,” as you might guess from its name, keeps viewers guessing as to whether or not two of the main characters will consummate their relationship. There really isn’t much guessing, however, since the presumption is always that, yes, of course they will. It’s all down to when it’s likely to happen. “Gavin and Stacey,” however, speeds up the process considerably, presenting a series where the titular characters have been conversing on the phone for ages but are only just preparing to embark on their first date when the first episode commences. As a result, it’s a fair bet from the get-go that any such encounter is likely to happen far sooner than later – and it does. 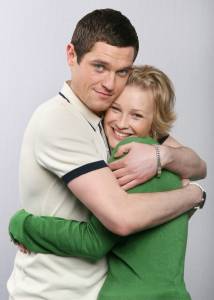 God love Mathew Horne and Joanna Page. The story of two individuals who work for the same company at different locations and fall in long-distance love is one which, on paper, seems to be little more than a comedic device for wacky shenanigans. And so it might be, were it not for the fact that you cannot watch the performances of Horne and Page and not immediately believe that Gavin and Stacey were made for each other. It’s remarkable, really, because when you’re talking about a series that lasts only six episodes and encompasses approximately as many weeks of time unfolding within the show itself, you’d expect that it would feel horribly rushed for the couple to meet, go out, get engaged, and get married. But it doesn’t. From the moment they meet, you know they love each other, and you know they’re destined to end up together forever.

There are shenanigans after a sort, though they’re not so much wacky as realistic. Gavin’s best mate is a robust, rotund gentleman named Smithy (James Corden), Stacey’s gal pal is the equally formidable Nessa (Ruth Jones), and although the series ignores the traditional “will they or won’t they” formula with them as well, having them hook up in the first episode, they’re still great comedic characters. Nessa’s back history is convoluted, but the bits and pieces that emerge – her first husband was one of Gladys Knight’s Pips, her second husband was executed by a firing squad – are hilarious, and although Smithy seems on the surface to be the standard sitcom fat guy who loves to party, his sentimental side emerges before season’s end.

And what fun would rapid-fire wedding plans be without involving the families of the bride and the groom? Gavin’s dad, Mick (Larry Lamb), is as down to earth as his son, and his mum, Pam (Alison Steadman), is well intentioned but with a tendency to approach hysteria when trying to put on the best of all possible fronts in social situations. Stacey’s dad is deceased (though he plays a part in the season finale which may well bring you to tears), but his brother, Bryn (Rob Brydon), more than fulfills the fatherly role in her life, and her mum, Gwen (Melanie Walters), is fiercely protective. Neither, however, is immediately certain that Gavin is the man for Stacey – though, to be fair, that’s because she’d been engaged five times before he entered the picture.

“Gavin and Stacey” succeeds not because it’s funny (though it certainly is), but because it tries to stay as close to reality as possible with the love story between its two characters. The sidebar visits with everyone else add to the comedy, but Horne and Page make this the best TV romance in recent memory.

Special Features: Once again, the BBC does not let us down by offering insufficient bonus material. There are audio commentaries on three of the six episodes from Corden, Jones, and director Christine Gernon, outtakes, a making-of featurette, and footage of the show’s filming in Leicester Square. If you learn nothing else from these various items, then you will come to be assured that, when it comes to Joanna Page’s performance in the series, there’s precious little acting involved. She is Stacey.

Check out the contribution from the “Gavin and Stacey” cast to the UK’s annual Red Nose Day, with contributions from Robin Gibb and Sir Tom Jones. Brilliant, it is.