Well, you know what the Smiths said: if it’s not love, then it’s the bomb that will bring us together. And so it was at the beginning of this week’s “True Blood,” as we saw Sookie suck the silver shrapnel right out of Eric, God love her…and, by the way, the phrase “suck the silver shrapnel” clearly needs to be popularized as a double entendre post-haste. (On a related note, I also anticipate quoting Sookie’s exclamation, “You big lying A-hole,” enough to bring it into the pop culture lexicon pretty quickly.) Eric’s delivery of the phrase “she was superb” to Bill was genius…as, for that matter, was his chicanery to get hooked into Sookie’s emotions. The intimate discussion between Sookie and Bill no doubt thrilled fans of Charlaine Harris’s original novels, as it confirmed that they were finally going to get what they’ve been waiting for: a pairing-up between Sookie and Eric. And is it me, or was that the most erotically charge scene of the season to date? Maybe it’s just because there was no blood being smeared this time around.

Jason was clearly suffering from a little post-traumatic stress, given the way he looked when he saw Luke’s dismembered hand. As a result, the discussion between Sookie and Jason wasn’t terribly surprising, but it was sweet and heartfelt, a tone we’ve not seen between the two of them in quite some time. You can’t blame Jason for slipping into depression over their lack of family, but kudos to Sookie for giving him a kick in the pants about growing up. I doubt if it’ll take, given his history, but it’s a start, anyway. By the way, only a sister could get away with telling a guy that he’s lazy rather than dumb and to say that she sometimes wants to stick his head in a bucket and kick it around the yard. Did you notice that she gave him shit, but he opted to avoid any insults, even in jest? Maybe he’s smarter than I’ve given him credit for.

Could Jessica and Hoyt be any cuter a couple? I loved that comment from Hoyt when he was doing verbal battle with his mother, smacking her down for only bothering to bring up his father when she doesn’t like something he’s doing. But, then, I loved pretty much that entire scene, particularly when he was listing off the various types of people she doesn’t like. (As someone who was raised in the South, I dare say that I’ve heard her excuse about how why she doesn’t like vampires – “it was the way I was brought up” – more than a few times in a different context.) I think it was always a given that the meet-and-greet at Merlotte’s between Jessica, Hoyt, and his mama was already going to go poorly, but who knew it would result in Mama being around for Maryanne’s explosive entrance into the place later that evening?

END_OF_DOCUMENT_TOKEN_TO_BE_REPLACED

“Dallas vamps are serious and scary as shit.” So says Barry the telepathic bellboy when Sookie presses him about his “gift” tonight. As far as I can tell, all vampires are serious and scary as shit, but if the Dallas vamp branch is indeed more serious and scarier than the southern variety, I feel for whomever has abducted Godric. Apparently holding true to their reputation, the two Dallas vampires (I didn’t catch their names) who are working with Eric and Bill to try and locate Godric aren’t very interested in a peaceful resolution – the male is ready for war with the Fellowship of the Sun – but you just knew Sookie was going to get tangled up in whatever plan they adopted. Sure enough, she volunteered to infiltrate the Fellowship, which I’m sure will go swimmingly considering Bill won’t be able to help her should she run into any daytime trouble. (On a side note, am I the only one who chuckles anytime Sookie talks tough to a group of vampires? Since when does being a telepath qualify you as a badass in a room full of thirsty vampires?) 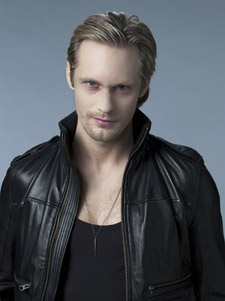 I had assumed (as I’m sure others had as well) that Eric’s intense interest in finding Godric was because the latter was the former’s maker, and sure enough, we were treated to a cool flashback of the day Eric got his fangs. He seemed to be a medieval warrior of some kind (was that Swedish they were speaking?) who knew his way around a battlefield, so much so that Godric just had to have him. I’m even more intrigued by the Godric storyline after seeing how young he looks and knowing that he’s actually 2,000 years old. Dude’s been around for a while, huh? I’m guessing Bill’s maker can’t quite match Godric’s lifespan, but judging by the final scene tonight, I’m also guessing we’ll be learning a lot about Lorena in the coming weeks….

Meanwhile, if it’s war that the Dallas vamps want with the Fellowship, Reverend Steve will be happy to oblige, judging by the impressive arsenal he showed Jason tonight: wooden arrows, wooden bullets, a flamethrower, silver throwing stars (very cool) and a guillotine that’s apparently on order. After wrestling with his feelings about vampires early in his Fellowship experience, Jason appears to be all in now that his Light of Day Institute (L.O.D.I) bootcamp has started. He’s not getting the Golden Boy treatment anymore but he definitely impressed Gabe and Sarah when he helped sorry-sack Luke over the fence. ‘That’s a frickin’ soldier of God,” Gabe proclaimed, and Sarah later showed that she agreed by…um…helping Jason put the finishing touches on his bath. Their exchange was classic: “No.” “You don’t mean it.” “No, but I should.” It’s okay, Jason – we don’t blame you. I mean, the preacher’s wife is smokin’ hot! And now, with Sookie’s plan going into effect next week, it’ll be interesting to see how and when Jason’s new path crosses Sookie’s (and Bill’s, of course).

I’ll admit that the Tara/Maryann storyline runs a little hot and cold for me. I’m definitely interested to find out what exactly Maryann is trying to accomplish by keeping Tara around, but the story didn’t advance all that much tonight. Sure, it’s good to know that Maryann can apparently alter the energy around her however she sees fit, tonight choosing to have everyone in Merlotte’s gang up on Tara after Tara told Maryann that she couldn’t move into Sookie’s house with her, but what the hell is her endgame? And how is Eggs involved? I’m still not a fan of Daphne’s either. Sam sure likes having another shape-shifter around – especially one as cute as Daphne – but where did the gashes on her back come from and, more importantly, how did she survive the attack in the first place? For now, I’m assuming Maryann was the attacker (though that’s just the easy guess at this point) and, since she can force Sam to change into a dog whenever she feels so inclined, I wonder if she can actually turn someone into a shape-shifter. That may seem far-fetched but there’s obviously some kind of story behind those long scars on Daphne’s back. And besides, is anything really far-fetched on this show?