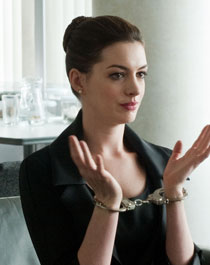 Seems like today, everyone’s talking about the same few news items. I’d hate to be left out.

* Adding to the endless speculation over who will be cast as whom in “Spiderman 4,” Nikki Finke enters the more or less pointless but, I suppose, fun fray by naming Anne Hathaway as having been “approached” for a role which her readers have decreed to be the Black Cat.

* The Academy has come up with a short-list of nominees-to-be-nominees in the Best Documentary category. Everyone is making a big deal about the absence of Michael Moore’s “Capitalism: A Love Story” and then naming any one of a number of highly regarded documentaries that didn’t make the cut, including the rather predictably ignored “Anvil! The Story of Anvil” (looks like too much fun) and James Toback’s look at Mike Tyson (to, er, biting?). I’m personally not thrilled that “We Live in Public,” which I still think might be the most important movie made this year, is out of the running, but then I’m obviously somewhat personally invested. Anne Thompson is right, however, that the doc category is growing ever more interesting and crowded.

* The Oscars have an alliterative director. Will he win an Emmy?

* “New Moon” mania breaks out with news of huge early ticket sales. If you have more time on your hands than me, you can read this very lengthy interview and I’m sure pretty interesting interview with director Paul Weitz. I could barely skim it right now, but here’s a quote that leapt out at me:

I have been kind of hazed into the world of VFX, so I understand how to do that — or at least who to trust — and I get what it is that they’re trying to do. I think that with the right visual effects supervisor, I can direct animators who are animating creatures, who are like actors in that sense. It’s just that their performances are being done over the course of months. Each five-second shot takes months to develop. That stuff I like very much, but I wouldn’t say that I’m either an expert or kind of a savant as far as that goes. That’s Peter Jackson and Guillermo del Toro and Sam Raimi. That’s not me.