A short chat with Ryan Gosling of “Drive” 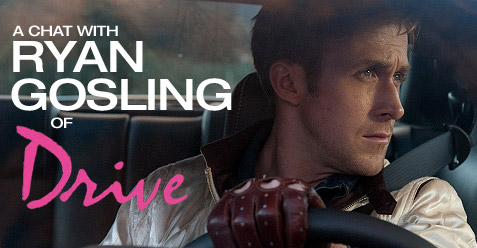 No disrespect to Keri Russell or Justin Timberlake, but Ryan Gosling is easily the most powerfully versatile actor to emerge from that thespian crucible we call the Mickey Mouse Club. He’s done very well playing relatively straightforward leads in “Fracture” and the chick-flick phenom, “The Notebook,” but the 30-year-old Canadian with an oddly urban accent has specialized in playing a wide variety of oddballs and doing it better than anyone of his generation. Right now, he can be seen going way into the violent dark side of life with the rather remarkable thriller, “Drive.” From Danish filmmaker Nicolas Winding Refn, it’s a fascinating blend of 70s/80s aesthetics, true romance and deliberately ugly brutality. Describing his attraction to the film, Gosling says, “I’ve always wanted to be in a violent John Hughes movie. I always thought that if ‘Pretty in Pink’ had a head smashing, it’d be perfect.”

He was more serious than you might think when he said that. And so it went as a very interesting Mr. Gosling spoke with Bullz-Eye and other journos about his latest film. Check out a sample of the roundtable discussion below and then head over to Bullz-Eye to read the full interview.

On his unusual relationship with violent cinema and on being a head-smashing “superhero.”

When I was a little kid, when I first saw “First Blood,” it put a spell on me. I thought I was Rambo; I even thought my face felt like Sylvester Stallone’s face when I touched it. I went to school the next day. I put steak knives in my Fisher Price Houdini kit, and I took ’em, and I threw them at all the kids at recess. I got suspended, rightfully so, and I’m sorry and I learned my lesson and I never did anything like that again. But my parents said, “This guy can’t watch movies, or violent movies anyways.” They put me on a leash and I could only watch Bible. National Geographic movies, and black and white comedies, Abbott and Costello…

I understand the effect that movies can have on you, and the kind of spell that they can cast on you. When I first read this script, I felt like this is a guy who’s just seen too many movies. He’s going around acting like he’s the hero of his own action movie. I wanted to play a superhero, but all the good ones are taken. I thought, “Well, I can create my own, potentially.”

On working with “Drive” director Nicolas Winding Refn, best known previously for such hyperviolent slices of cinema as the acclaimed “Bronson” starring Tom Hardy and the Danish “Pusher” trilogy.

Look, ever since Nicolas was a little boy, his mother has been telling him he’s a genius and everything he did was genius. Even when he was watching “Texas Chainsaw Massacre” while he ate his cereal before he went to elementary school in the morning. Obsessively, she believed he was a genius. I think that, you get told that enough, eventually it becomes true. I’m not sure that he really started out as one, but I do believe he’s become one.

He is a very unfiltered filmmaker. He just makes what he wants to see. If it’s boring to him, he won’t shoot it. He fetishizes things, in a way… He sexualizes things because he can’t maybe be as sexual as he’d want to be [because he’s married]. He talks about filmmaking a lot like having sex. It has to arouse him and has to be sexually interesting to him, even if it’s a pair of gloves or where you hand is in the frame. It has to literally turn him on.

Fans of “Entourage” know that season premieres have never been one of the show’s strong suits (they tend to act more like a prologue than an actual part of the story), but while tonight’s episode wasn’t particularly memorable, it did set up quite a few interesting arcs for the coming season. The most obvious of the bunch is Vince’s return to the big time after the colossal failure of “Medellin” nearly ruined him for good. Granted, working with Scorsese will usually do that for you, but it’s just nice to see Vince back in his old digs worrying about things like getting his driver’s license instead of how he’s going to climb his way out of debt.

It’s a shame we didn’t actually get to see any of the footage from the film (maybe next time), but he did talk with Jay Leno on “The Tonight Show” about his new gig: a biopic about Enzo Ferrari, hence the reason why he needs to learn how to drive. The actual exam didn’t go over quite as well as Vince’s confidence would have implied (he practically ran over the entire course of traffic cones), but he was still able to earn a passing grade after bribing the instructor with premiere tickets for his new film. Not exactly a sign that Vince has matured, but with everyone else in his life doing just as good as he is, it’s probably about time he starts.

After all, with Drama constantly working and Turtle always hanging out with Jamie-Lynn, the one person Vince has always been able to rely on is Eric. That’s all about to change, however, now that Eric has agreed to sublet a house from one of Sloan’s friends. Why he’d want to live in that house for only a year is beyond me, but Eric clearly understands that if he ever hopes to get a second chance with Sloan, he’s going to have to be a little more independent. Vince doesn’t seem to have a problem with it at the time, but now that he sees just how lonely life could be without anyone there to keep him company, it might just force him to reassess his bachelor lifestyle.

Meanwhile, with Vince back in the industry’s good graces, Ari is having the time of his life alongside his new partner-in-crime, Andrew, who’s settled into the agency quite well with a string of new clients. (Of course, if the writers knew that “My Name Is Earl” would be cancelled mere months after the episode was filmed, they probably would have chosen a different client for him to sign.) Okay, so maybe business isn’t exactly booming, but that doesn’t stop Lloyd from demanding his long-awaited promotion. Ari finally gives in to Lloyd’s constant bickering and offers him a deal: do whatever he says for 100 days and he’ll make him an agent. I’m really hoping Ari doesn’t follow through, though, because while Lloyd certainly deserves the promotion, the show would be better off maintaining that dynamic. It’s worked this long, so why mess with a good thing?