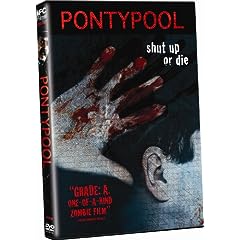 Of all the places you’d expect to possibly find a series that possesses overtones of David Lynch’s work, one of the last would probably be Ion. You may remember it as PAX TV, but that was a long time ago. These days, it’s home to a great number of series that definitely go against what you used to see on the network during the early part of the decade. Gone are the “Touched By An Angel” and “Highway to Heaven” marathons, replaced by reruns of “NCIS” and “Criminal Minds.” Tonight, they’re bringing a Canadian series to their airwaves for its Stateside debut…and, yes, “Durham County” is just as dark as the Lynch reference suggests. Unless, of course, you see anything light about a series focusing on a homicide detective who moves his family to the suburbs to start over after his partner is killed and his wife is diagnosed with breast cancer, only to discover that his new neighbor (and former childhood nemesis) may be a serial killer. We had a chance to speak with star Hugh Dillon – who you may also recognize from his work on another Canadian import, CBS’s “Flashpoint” – about his work on both of his current series, his role as Joe Dick in “Hard Core Logo,” and his life as a real-life rock ‘n’ roll star while fronting the Headstones.