Blu Tuesday: Green Zone, She’s Out of My League and Entourage

With the World Cup in full swing, you’d think that the studios would have taken advantage of the event by releasing a few soccer-related titles on Blu-ray. (“Bend It Like Beckham” or “Victory,” anyone?) It was definitely a lost opportunity, but that’s okay, because there are still plenty of great titles to choose from, including the Blu-ray debuts of two HBO comedies. 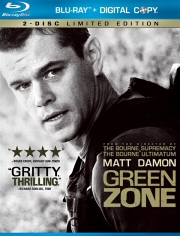 Though not as exhilarating as the “Bourne” films, or as poignant as “United 93,” director Paul Greengrass’ post-9/11 thriller, “Green Zone,” is still a damn fine movie that takes a politically-charged look at the botched search for WMDs in Iraq during the infancy of the 2003 United States-led invasion. Matt Damon once again teams up with Greengrass as the Chief Warrant Officer in charge of the investigation, only to realize after coming up empty on several occasions that the “solid intel” he’s been given may not be as reliable as his superiors believe. Greengrass’ trademark shooting style will still have some popping Dramamine just to keep from feeling dizzy, but the chaotic nature of the action makes sense in a war zone environment. I’m not entirely sure why this bombed so badly at the box office, but Universal clearly still believes in the film enough to release a Blu-ray that’s been adorned with plenty of bells and whistles. 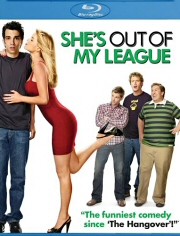 “She’s Out of My League” (Paramount)

It’s not exactly the most original romantic comedy to come down the pike, but thanks to some sharp writing and great performances from its cast, “She’s Out of My League” is a great Judd Apatow clone that will have you laughing more than you might expect. Jay Baruchel is like a young Ben Stiller as the anemic geek who can’t believe he’s dating someone as hot as Alice Eve, and though the movie never gets quite as crazy as “There’s Something About Mary,” there are definitely shades of the film throughout. But just like that movie, as well as Apatow’s “The 40-Year-Old Virgin” and “Knocked Up,” “She’s Out of My League” really gets a lift from its supporting players, particularly T.J. Miller and Kristen Ritter as the mean-spirited best friends of the two leads. Pity Paramount couldn’t scrounge up better special features, because while “She’s Out of my League” is worth owning, the lackluster Blu-ray is better off just renting. After the disastrous fifth season of “Entourage” – which might very well go down as the lowest point in the show’s history – it seemed like the writers had run out of good stories to tell. We may not have wanted Vincent Chase to find success as easily as he did in the earlier seasons, but we certainly didn’t want to see him slumming it as a nobody either. Thankfully, Season Six righted those wrongs almost from the start, and although it might not be the best season, it was a necessary resurgence that will go a long way in building towards the show’s impending finale. The main quintet continues to deliver solid work year in and year out, and although there aren’t as many standout guest stars this season, Matt Damon’s playful parody of himself as a charity-obsessed actor is without a doubt the funniest cameo to date. There’s certainly an argument to be made for why it’s unnecessary to buy the show on Blu-ray (especially when the other seasons likely won’t be released on the format), but it’s nice to see that HBO has made it available so that those who do want it in HD can get it.