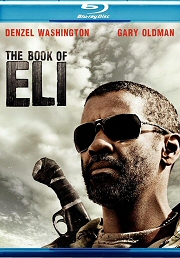 Unlike the above extras, this two-part featurette is a wildly unfocused look at the film’s story. The first section, “Starting Over,” takes a more real world approach to the subject, with various professors and academics discussing how we would live through a real apocalypse, as well as what role religion would play. The second half (“Eli’s Journey”), meanwhile, is a fairly generic EPK about making the film that pares in comparison to the material in the Maximum Movie Mode.

A four-minute animated prologue about Carnegie’s childhood, supposedly detailing how he came to be the man he is in the film. It’s an unnecessary inclusion that can easily be ignored.

Running only two minutes in length, this collection of deleted and alternate scenes is almost as pointless as the aforementioned prologue. There’s only one scene that even adds anything to the story – a shot of Ray Stevenson’s Redridge burning a bunch of books, including an issue of Time with a cover story about the nuclear fallout – and even then it’s not much.

“The Book of Eli Soundtrack”

This brief discussion between composer Atticus Ross and co-director Allen Hughes feels more like a commercial for the soundtrack than a featurette about scoring the film. In fact, they speak more about their careers than the actual music, so you might want to just skip this one altogether.

Okay, so maybe the Blu-ray release isn’t as strong as it looks, but despite some of the more useless extras that have been tacked on, the Maximum Movie Mode and Focus Points are definitely worth your time. It’s not a completely terrible movie, either, so it has that going for it.