The Tudors: The Complete Third Season 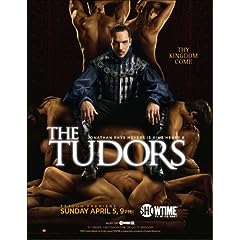 “The Tudors” is a Golden Globe-nominated, Irish-produced historical fiction series that focuses on the reign of King Henry the VIII. It has been a part of Showtime’s stable of high-quality dramas for three seasons now, and has been renewed for a fourth (and final) season that will debut in April of 2010. The series is carried by Jonathan Rhys Meyers, who is a tour de force as the spoiled king, but the rotating supporting cast — including Sam Neil as Cardinal Thomas Wolsey, Jeremy Northam as Sir Thomas More, Natalie Dormer as Anne Boleyn, and James Frain as Thomas Cromwell — has made this more of an ensemble drama.

Ever scandalous, the third season focuses on Henry’s marriages with Jayne Seymour (Annabelle Wallis) and Anne of Cleves (Joss Stone), along with his budding relationship with Katherine Howard (Tamzin Merchant). From a political point of view, Henry has to deal with the Pilgrimage of Grace, a protest of England’s separation from the Catholic church. This leads to the downfall of Cromwell, who was at one time Henry’s closest adviser.

There is also the matter of Henry’s daughter, Mary (Sarah Bolger), from his first marriage, who was estranged for sometime but now finds herself back in her father’s life. She is a steadfast Catholic, so Henry’s treatment of her mother and the Catholic church never sat well with her, and she often finds herself at odds with the king’s decisions.

Not unlike HBO’s “Rome,” “The Tudors” does a great job of immersing the viewer in the period with its costumes and sets, and everything feels authentic. The only quibble is that the 32-year-old Rhys Meyers was asked to play a man 13+ years his senior, but the actor has been able to pull it off.

All eight episodes are included in the three-disc set. Bonus features include a featurette about the Tudors timeline and the first two episodes of “United States of Tara,” another Showtime series. There are additional special features that can be unlocked on a computer — interviews with Rhys Meyers, Wallis, Stone and others.

Click here to buy “The Tudors: The Complete Third Season”