* H-town weeps as Hugh Jackman turns down the 2010 Oscar gig. Let’s keep this simple, folks,  just let Neal Patrick Harris do it and make it a clean Tonys-Emmys-Oscar sweep. 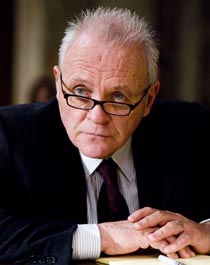 * By Odin’s beard, I sure hope Anthony Hopkins doesn’t have a God-complex. Yes, he’ll be the ultimate Norse mythology big cheese, Odin, in the Thor flick to be directed by Kenneth Branagh.

* The death of a well-regarded San Francisco literature professor usually wouldn’t be mentioned on a movie blog or in a major film trade publication. However, since August Coppola was Nicholas Cage‘s father and the brother of Francis Coppola and Talia Shire and the uncle of Sofia and Roman Copolla, it does. Our condolences to easily the most influential single family in recent film history.

* What scares Marty? Except for “Isle of the Dead” which didn’t do much for me and a few of these I haven’t seen, I can definitely go to bat this list — as long as you don’t really need to be scared entirely and completely out of your wits in order to love a horror. (As regular readers know, I don’t.) I particularly dig “The Haunting.” Robert Wise rules.

* What scares me? A few of the free movies you can watch this weekend over at Criterion’s great The Auteurs site definitely qualify, particularly “Eyes Without a Face.”

* The “half-empty” side of 10 “Best Picture” Oscar nominations. Personally, I’m not sure it really matters that much though I definitely agree with Leonard Maltin, David Thomson that the high-quality/mass audience/big studio blockbuster is something of a lost art, for the time being.

* And Christopher Campbell posts his final, Halloween-themed “Today in Film Bloggery” for the about to be ended Spout blog as Karina Longworth has some witty answers to last minute questions. I’m sure we’ll be hearing from them both again.