“Law Abiding Citizen” is one of those movies you like more at the time than in retrospect. I mean, come on, you’re thinking. Still, there’s something to be said for a movie you like well enough at the time.

Still, this is the kind of flick that is not only completely review proof but could even be word-of-mouth proof at first. That’s doubly true given that young males old enough to see R-rated movies have theoretically already gone through the host of high quality violence-laden flicks still in theaters. A respectable performance might well be in the cards here.

On the other hand, it’s got next to zero explicit violence, but young males and females alike will likely be flocking to each of the 800 theaters this weekend that will be showing the absolutely sensational, if uni-dimensional, debut of director Oren Peli, “Paranormal Activity.” The very clever video flick, which managed to place itself right in the middle of the top ten movies while playing in only 159 theaters last week (and the numbers I reported were actually a bit low, Box Office Mojo had the corrected figures later in the week), will still be in only a fraction of the theaters the big new releases will be in (between 2700 and 3700). Nevertheless, there’s a mighty good chance each of those theaters will be happily crammed to capacity with scare-lovers ready to have their willing suspension of disbelief messed with via home-video technology. I’d get your tickets well in advance if you want to see this one this weekend.

It’ll be in almost 2,000 more theaters, but something tells me this week’s other horror entry, the remake “The Stepfather,” may be a footnote in comparison. The movie has been sequestered from critics, which is interesting given that the original 1987 film, directed by Joseph Ruben and written by legendary crime writer Donald E. Westlake, was something of a critical as well as commercial hit. The one commercial edge the unreviewed film has is it’s PG-13 rating.

However, seeing as “The Stepfather” is almost certainly a lot more violent than “Paranormal Activity” — which obviously threw in a few harsh curse words to ensure a horror box office friendly R-rating — clever parents may decide to earn free cool-points with their older kids by taking them to see what is likely to be the vastly superior and also less questionable scare show. I don’t know when the MPAA is going to get hip to the fact that, by the time you get to be 13 in this country, you’ve heard, and probably used, the F-word a few thousand times. In any case, I wouldn’t be hugely surprised if “The Stepfather” comes in somewhere after last week’s sure-to-drop-substantially uncontested box office winner, “Couples Retreat.” 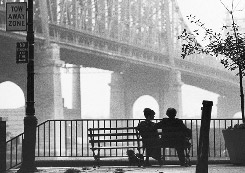 And, that, folks, is not all because we have some very notable larger-than-usual limited releases as we start to near awards season. It’s not quite being greeted with open-arms by the critical base it needs, but the multi-filmmaker anthology film, “New York, I Love You,” is opening big for an first-weekend arthouse flick in 119 theaters. It’s also the inspiration for a terrific Bullz-Eye feature on great New York-set films of the past from certain members of the Bullz-Eye staff. I say “terrific” with total dispassion as I had absolutely nothing to do with nine of the entries. Nothing at all.

And, finally, on seventy screens is a film I was hoping to review but circumstances — and a last minute reassignment to see “Paranormal Activities” — prevented me from seeing it again so I could give it a proper critical treatment. I speak of the epically funny blaxsploitation spoof I’ve been pimping — and I use the term advisedly — since I saw it last June, “Black Dynamite.” This movie is not only a loving salute to the bygone seventies genre from cowriter-director Scott Sanders with a potentially big-time star-making lead performance by Michael Jai White (“Spawn”), it pairs extremely well with the finest of malt liquors. If you’re anywhere near New York, L.A., Atlanta, Philly or Chi, Bob says check it out or be left out of the scene.