All hell has broken loose in Bon Temps. Quite literally, from the looks of things. As Jason so eloquently put it, “This is fuckin’ fucked up!” Agreed.

It amazed me how nonchalantly Sookie and Bill walked into Sookie’s house (or what used to be her house) after seeing the sacrificial offering erected in her front yard. At the very least, wouldn’t Bill lead the way instead of letting Sookie walk in first? Sure enough, Maryann comes in shortly thereafter and, once pleasantries have been exchanged and Sookie pulls her patented Tough Chick act, Maryann slams her up against the wall. Bill to the rescue! In the split second before Bill sunk his teeth into Maryann’s neck, I wondered how her blood would affect him. Yeah, not good. Well, not good for Bill, anyway, but judging by Maryann’s cries of “yes, ravage me!” it looks like she enjoyed it plenty. She also enjoyed the little laser light show that shot out of Sookie’s hand. “What are you?” Maryann asked several times following that incident, a look of amazed curiosity on her face. Sam may be Maryann’s priority right now, but Maryann is so utterly fascinated by Sookie after their encounter that I’m guessing she will be Maryann’s primary target before the season is over. That’s not to say that Maryann will give up on Sam – she seems pretty intent on tracking him down, to say the least – but like Eric before her, Maryann has eyes for Sookie. 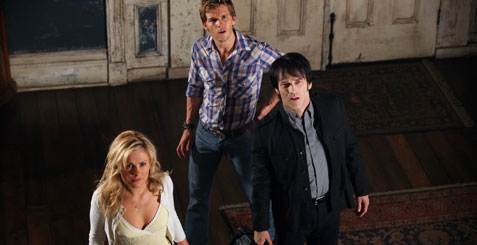 Speaking of eyes, just about everyone in town has those utterly creepy, dead, black eyes, including Miss Tara Mae. To quote last week’s post from esteemed blogger Will Harris, whose shoes I hope to be at least serviceably filling tonight: “While I’m sure there have been less successful interventions than the one by Lafayette and Tara’s mama, *I* haven’t seen one.” Well, Lafayette would seem to agree with Will when, after trying prayer, pleading and a vicious slap across the face, he uttered, “This has to be the worst motherfucking intervention in history.” A little later, Lafayette’s invitation to Bill provided another highlight in an episode full of great moments. Some of those moments were funny — Eggs cheerfully asking Maryann, “You want us to kill something, so it’s extra fresh?” — while some were of the more disturbing variety, like Tara promising, “He’s on his way and he’s going to kill us all.” I’m telling you, those eyes give me the willies!

So now that Bill and Sookie were able to team up and pull Tara out of her trance, I wonder just how easily she can fall back into it. Lord knows Lafayette will do everything in his power to keep Tara away from Maryann, but you just know she’ll try to go rescue Eggs at some point. Maryann didn’t seem overly concerned about Tara leaving last week when Lafayette and Tara’s mama rescued her from Sookie’s house, but maybe that’s because she knew Tara would be back soon enough. Hey, everyone digs Maryann’s parties! 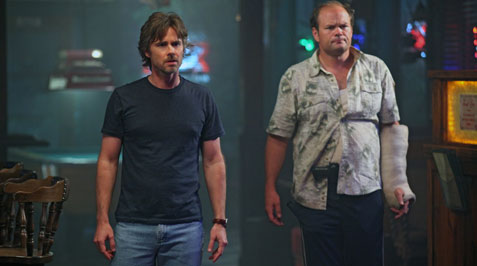 In fact, when I say “everyone,” I mean damn near everyone, since just about the entire town is now in Maryann’s employ as she hunts Sam down. Has there ever been a more formidable duo than Sam Merlotte and Andy Bellefleur? Okay, don’t answer that, but at least Andy provided some good laughs tonight, most notably after Sam told him that Maryann probably wanted to cut out his heart in front of a bunch of naked people. “And people thought I was crazy for seein’ a pig.” Poor Andy, although he doesn’t look so crazy now. One wonders whether Andy or Jason came up with the idea to trick the townies into thinking that Jason was Dionysus (or whomever the hell they’re all waiting for), but it worked like a charm, thanks in no small part to Sam’s disappearing act. Andy’s and Jason’s reaction to that was perfect, and the bare-ass-apron shot was a great touch. It’s great to see Jason taking charge in the wake of his L.O.D.I. training, and it looks like he’ll be on the frontlines when this all comes to a head over the final two episodes.

Admittedly, there is plenty that I’m missing here (Terry was awesome tonight as the commander of the townie brigade, as was Hoyt’s batshit crazy mom), but I’ll wrap it up with a comment about last week’s blog entry from fellow PH blogger John Paulsen: “One thing this show does better than just about any other I’ve seen is end each episode with a bang…usually some sort of revelation/cliffhanger that keeps the audience wanting more.” True to form, I sure as hell want to know who the Queen is and why she has a horde of Mr. Smiths surrounding her house. At first I thought Bill might be going to see Lorena, but that doesn’t make much sense. Either way, it’s looking like the Queen will be playing a pivotal role in the war that’s about to go down in Bon Temps. I’m just wondering who’s going to survive, and who won’t.