Steve Benen, who is the main guy at the terrific political blog of the liberal Washington Monthly, frequently posts what he calls “mini-reports,” and as someone who desperately needs an efficient verbal containment device that will discourage me from running off at the keyboard, I’m borrowing his format. You can’t copyright asterisks, can you?

* Fortunately for readers, my eyes glaze over just as quickly as yours do when you the subject is proposed union contracts. Nevertheless, the ongoing Screen Actor’s Guild (SAG) vote is important stuff and I can’t completely ignore it, even if I’m utterly unsure how I’d vote if I were in the union. Furthermore, I’m still trying to figure out exactly what happened to the current president of the union, Alan Rosenberg, who I gather has been stripped of his authority by the “new majority” who favor a proposed new contract. I could go on, but I’m already experiencing a minor case of mind melt, so here are the dueling videos: For “Yes” — Tom Hanks. For “No”: a bunch of talented but far less famous folks, including Tom’s good friend Ron’s dad. And a very long, but kind of interesting comment by Justine Bateman. More of this to come, I suspect.

* Ever heard of Tom Swift? I barely have myself, but I gather he was the hero of a series of pre-“Hardy Boys” type adventures with a touch of Jules Verne about a boy inventor. With bigwigs rummaging through such relics of a more polite time in popular culture as “Tintin,” it makes sense that Hollywood (director Barry Sonnenfeld, of “Men in Black” fame, included) is taking an interest.

* Box Office Mojo has some revisions. “Terminator Salvation” beat “Drag Me to Hell” after all.

* THR likes “The Hangover”, and I could go for a Bloody Mary right about now, myself. 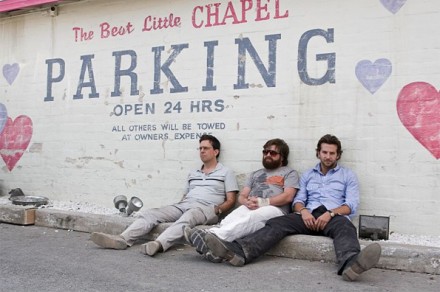