Much like last week’s disappointing selection of high-def titles, today’s pick of the litter isn’t quite as fresh as one might hope. There’s definitely a good variety among the movies available, but there’s nothing here that exactly screams “Buy me.” Still, while my personal collection will remain unchanged for another week, other Blu-ray enthusiasts might find something they’ve been waiting to pick up, or at the very least, take for a test drive. 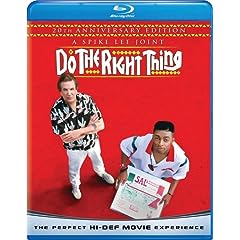 “Do the Right Thing” (Universal)

I’ve never been a fan of Spike Lee, save for the uncharacteristic crime thriller, “Inside Man.” His fabricated racism is annoying, and it never fails in ruining an otherwise good story. Though it’s admirable to want to address a serious issue like racism through film, the way in which he tries to achieve it is nothing short of scandalous. Take Danny Aiello’s character in “Do the Right Thing,” whose life is ruined when a brawl inside his pizzeria leads to the accidental death of Radio Raheem. Not only is he completely warranted in his actions, but he isn’t even responsible for Raheem’s untimely demise. Of course, Lee wouldn’t have the ending he so desperately needs if he doesn’t lay the blame on Aiello, and instead of pointing a finger at Raheem (who refused to turn off his boom box after being asked nicely) or Giancarlo Esposito’s Buggin Out (the real culprit of the altercation), he decides to cook up a theory that even the much-loved (but still white) owner of the local hangout is a racist. Personal thoughts aside, the 20th anniversary Blu-ray release looks incredible, and the addition of a new retrospective documentary and audio commentary by Lee is a nice treat for fans of the film. You really have to love Lee’s work to want to sit through “Do the Right Thing” more than once, but if you do, you might as well watch it in HD.

Go ahead and file this one under Reasons Why Fanboys Hate 20th Century Fox. It’s not that the studio does a bad job of choosing properties to adapt. In fact, it’s quite the opposite, because they often make movies that no other studio would even bother with. Unfortunately, they don’t put nearly as much thought into the actual making of the film as they do into how much money they might make it if it’s a hit. I didn’t think it was possible to outdo the first “Street Fighter” film starring Jean-Claude Van Damme in terms of sheer crappiness, but “The Legend of Chun-Li” wins hands down. This is a movie that is so determined to ground the world of “Street Fighter” in reality that it loses all connection to the source material except for its characters’ names. The end result is just another generic martial arts movie with some of the worst acting you’ll ever see. It’s difficult to single out just one performance (take your pick), but when all is said and done, Chris Klein is practically guaranteed to walk away with a Razzie. “The Legend of Chun-Li” is a guilty pleasure at best, but unless you’re a fan of the game, and don’t mind seeing your a piece of your childhood ruined, you’d be best to stay away. 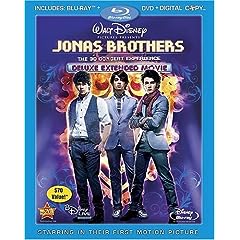 I really tried to sit through the entire Jonas Brothers’ “3-D Concert Experience” without feeling compelled to hit the fast-forward button on my remote, but unless you’re a teenager girl, it’s impossible to brave the trio’s Disney pop sound for 80-plus minutes. Thankfully, the film is broken up by little backstage moments that are actually more entertaining than the concert itself, including a clever “A Hard Day’s Night”-inspired opening that gives me hope that their upcoming TV series might not be all that bad. As for the 3-D effects, they’re no better or worse than last year’s Hannah Montana concert film (which is to say they’re not that good), but the band’s teenybopper fanbase won’t mind one bit. Of course, the real highlight of the three-disc set is “Up Close and Personal with the Jonas Brothers,” a behind-the-scenes featurette about the planning and execution of their new tour. It might not change your mind about their music, but it will force you to respect them as musicians.