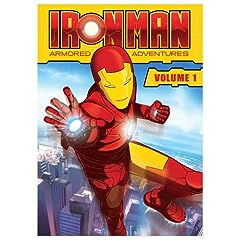 Following the box office success of “Iron Man” last summer, it was pretty much a given that Marvel would move forward with an animated series. When it was announced that Tony Stark would be getting the high school treatment, however, my interest in the project plummeted. Fortunately, I still had a lingering curiosity as to how it would turn out, and although a teenage version of Iron Man certainly isn’t ideal, the show actually works better than expected thanks to some solid writing and slick CG animation. Loosely based on the comic book roots, the series begins with teenage prodigy Tony Stark putting the finishing touches on his latest invention. But before he can show it off to his dad, he’s killed by longtime business partner, Obadiah Stane, in a coup to take over Stark Industries. Now, with the help of his friends Rhodey and Pepper, Tony begins to unravel the mystery behind Stane’s takeover, all while playing superhero in his new Iron Man armor. Sadly, only six episodes are included in this Volume One collection, so while we do get to see classic Iron Man baddies like Mandarin, Whiplash and Crimson Dynamo, you’ll be left wanting more when it’s all over. That may be Marvel’s intention, but with the new sequel due out in theaters this May, let’s hope they release the entire first season in time for casual fans to discover what they’re missing.