“Hey, wait a minute,” you might be saying. “Didn’t Warner Bros. release a special edition of ‘Casablanca’ just five years ago, in celebration of the movie’s 60th birthday?”

The answer is yes, yes they did — but five years after “Casablanca” turned 60, wouldn’t you know it, Warner Bros. has turned 85, and since this is not only one of the studio’s finest films but one of the greatest movies ever made, it stands to reason that a silly old two-disc special edition is no longer enough. Now the true movie buff needs to get his hands on the brand new, three-DVD Ultimate Collector’s Edition. 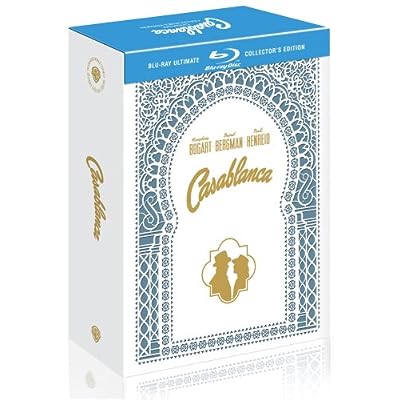 Much as it might look like it, this isn’t simply a case of a studio soaking its customers with endless slightly different “deluxe” configurations of a film. For all intents and purposes, the latest version of “Casablanca” is the same as the Special Edition: Two of the three DVDs — the important ones, featuring the film and the special features — are holdovers from the 2003 release, and everything else that’s been added is nifty enough, but probably lacks the cool factor that’ll send “Casablanca” fans marching into their local Best Buys, red-faced with shame and anger.

The third DVD consists of “Jack Warner: The Last Mogul,” an hourlong documentary directed in 1993 by Warner’s grandson, Gregory Orr. It’s interesting enough, but relates to “Casablanca” only tangentially, as it covers Warner’s life and times more or less completely (albeit without a lot of depth, which is to be expected, given its abbreviated length). The rest of the Ultimate special features aren’t on the DVDs — they’re assorted bits of swag that have been bundled into the box, including a “Casablanca” passport and luggage tag, a 48-page book with tons of photos and an essay, seven replica posters, and a handful of studio letters and memos pertaining to the film. They’re all nicely made, and owning them will doubtless be appealing to hardcore fans of the movie, but they aren’t the sort of crucial, revelatory added content that would render the Special Edition irrelevant.

Of course, if you love “Casablanca” and don’t already own the Special Edition, this will be the version you want to buy; it looks damn handsome on the shelf, and the 2003 transfer and bonus features (which include everything from featurettes, deleted scenes and bloopers to the animated short “Carrotblanca”) are befitting of a legendary movie like this one. Best of all, it’s currently on sale at Amazon for just under $40, which probably isn’t much more than you paid for that Special Edition copy of “The Incredible Hulk” that’s being used as a coaster in your living room.

Day of the Dead

First Look Studios is one crafty little company. Attempting to piggyback on the success of Zack Snyder’s “Dawn of the Dead,” the indie label greenlit a remake of George A. Romero’s third zombie flick, “Day of the Dead,” and even went so far as to cast Ving Rhames in a supporting role. It was all done in the hope that fans would believe the film was a follow-up to the 2004 remake of “Dawn,” and since it’s a pretty shady move on their part, I have no problem spoiling the fact that Rhames (playing a completely different character) dies within the first 20 minutes. The rest of the film is spent following a group of soldiers (led by Mena Suvari and Nick Cannon) around a small Colorado town trying to escape a virus outbreak that has turned certain people into flesh-eating zombies. Passed around like a bad cold, the new virus angle may sound like an interesting twist to a familiar tale, but it’s actually much worse. Somehow, this outbreak is only affecting one city, and though some victims turn into zombies after being bitten, others don’t. WTF? As for the zombies themselves, director Steve Miner has decided to stick with the newer, faster versions, but in order to produce their superhuman speed, he resorts to amateurish tricks like speeding up the tape. It’s all pretty lame stuff, and though an action sequence midway through offers gory headshots aplenty, it’s the only shining moment in a poorly made cash grab more than deserving of the direct-to-video treatment.

Director Takashi Miike is one strange dude, and that inherent weirdness is on full display in “Sukiyaki Western Django,” an unofficial remake of “A Fistful of Dollars” using a mostly Japanese cast speaking broken English. Set a few hundred years after the Genpei War, the movie takes place in a city called Utah-Nevada where two rival gangs – the Reds and the Whites – battle for control over a legendary treasure hidden somewhere in town. When a lone gunman arrives one day, the leaders of both clans try to woo him over to their side, only to discover that the nameless sharpshooter has plans of his own. Unfortunately, Miike’s homage to the Sergio Leone spaghetti westerns feels more like parody, and the choice to have his Japanese actors speak English (even though most of them are just sounding out the words phonetically) is just the start of the problems. The story jumps around so much that it’s difficult to keep the paper-thin story straight, the dialogue is incredibly lame, and there’s a surprising lack of action for a movie whose trailer was loaded with it. Additionally, most of the comedy injected into the story doesn’t work very well (namely a schizophrenic sheriff who comes off looking like Gollum from “Lord of the Rings”), and Quentin Tarantino delivers his worst onscreen performance since “Little Nicky.” “Sukiyaki Western Django” isn’t even half the film it could have been, and while many will expect something along the lines of a fun midnight movie, all you’ll find is a great idea gone to waste.

There’s a rule of thumb to follow regarding movies involving Quentin Tarantino: those he writes and directs are usually good, and those he produces are usually bad. There are a few exceptions to both sides of this rule (perhaps most famously Zhang Yimou’s “Hero”) which led me to believe that “Hell Ride” could be a fun little film, but as it turns out, it’s yet another low-rent vanity project from one of QT’s less-talented friends. Larry Bishop writes, directs and stars as Pistolero, president of the Victors biker gang. When one of their own is tortured and killed by rival gang member Billy Wings (Vinnie Jones) of the Six Six Sixers, Pistolero teams up with his two most trusted members, The Gent (Michael Madsen) and Commanche (Eric Balfour), and sets out to exact revenge.

Unfortunately, the film isn’t even remotely as entertaining as the red band trailer makes it out to be, and in the process, puts some really cool characters to waste. Bishop sure has the look of a badass biker, but he can’t act the part, nor can he write the kind of dialogue Tarantino is famous for. He certainly tries with these silly rhymes and play-on-word conversations that he must think sound ultra-hip, but they only make the boring mess of a plot even that much more difficult to sit through. Only Dennis Hopper and David Carradine (as veteran members of the rival gangs) truly deliver performances worth remembering, and it’ll make you wish the film spent more time developing their characters instead of focusing so much time and energy on Bishop getting his freak on with a horde of naked chicks. “Hell Ride” may sound like one hell of a time, but you’d be better off checking out FX’s “Sons of Anarchy” instead.

Director Stuart Gordon’s “Stuck” is a strange little film. On one hand, it’s probably the most original thriller I’ve seen in quite some time, and on the other, it’s so absurdly illogical that a majority of the movie teeters on parody. Mena Suvari stars as Brandi Boski, a hard-working nursing assistant who’s just been informed by her supervisor that she’s in contention for a big promotion. When Brandi accidentally hits a homeless man (Stephen Rea) after a night out on the town, however, she panics and drives straight home, parking the car in the garage with the man stuck in her windshield. As she soon discovers, the man is still alive, and as the hours pass without any sign of medical help, he begins to fight back against his captor. Calling “Stuck” a horror movie is a bit of a stretch, but there’s definitely something horrific about the idea that one human could be so cruel to another human because they’re afraid of the consequences. Stephen Rea’s solid performance as the down-on-his-luck victim really helps drive “Stuck” through some of the more ridiculous moments, but it’s ultimately the film’s ripped-from-the-headlines story that proves to be the most engaging element. The fact that a woman really did hit a man with her car, drove home, and then waited for him to die is just crazy enough that it needs to be seen to be believed. Granted, the film takes a few turns along the way, but it only makes the ride that much more thrilling.