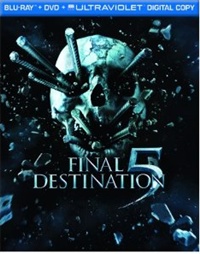 After a terribly disappointing fourth installment in the popular teen death series, New Line does the unthinkable by not only making a fifth “Final Destination” but, horrors (see what we did there?), casting old people as the leads. You know, people who are, like, 30, and even some born in the ’70s, ewww. Who wants to see old people die?

As it turns out, it was a very savvy move. “The Final Destination” was in a tough position in that its predecessor ramped up the death scenes’ difficulty factor (Rube Goldberg would have been proud, then probably ashamed) while maintaining self-awareness. “FD4” tried to maintain the planned chaos, but it was undone by bad dialogue, poor acting, and too much foreshadowing. From the very beginning, “Final Destination 5” does two things to separate itself from the previous movie: it casts grown-ups in the lead roles (David Koechner and Courtney B. Vance, holler) and gets serious in a hurry after a premonition on a suspension bridge leads a group of white collar drones to hop off the bus, Gus. Also, there are no bad last lines like “I’ve got my eye on you” (poor, poor Krista Allen), and while a death may be triggered by a chain reaction, the cause of death itself is often something normal (fall, fire). Don’t think they didn’t get creative, though; one of the women suffers a particularly gruesome accident that is impossible not to react to.

This, as you might imagine, does not end well.

They’ve also changed the rules – which is ironic, but for reasons we cannot divulge – when coroner William Blodworth (Tony “Candyman” Todd, returning for a third tour of duty, fourth if you include his voice work in “FD3”) suggests that the survivors can cheat death by killing someone else, a la “The Ring.” It adds an interesting wrinkle, since you get a glimpse of what people are willing to do in order to stay alive. Do not under any circumstances watch the bonus features if you haven’t yet seen the movie, otherwise the big surprise, which is a good one, will be spoiled. Definitely check them out afterwards, though, as you’ll get a glimpse of Koechner adding some of his natural comic flair. A welcome return to form for what was presumed to be a, um, dead franchise.