Stephen Lang is having a heck of a good year. Not only did “Public Enemies” find him once again teaming up with his old buddy Michael Mann (the two worked together back in the day, on “Crime Story” and “Manhunter”), but he also picked up a plum role in “The Men Who Stare At Goats.” And how’s he going to be following those two solid gigs? By turning up in one of the most anticipated films of the year: James Cameron’s “Avatar.” Bullz-Eye had a chance to chat with Lang about his experience as a a player in those films, as well as some of the many other roles he’s played in his career, including his work “Gods and Generals,” “Last Exit to Brooklyn,” and others, and you’ll be able to check out that chat in its entirety next week. But as a Thanksgiving treat, here are a few quotes to get you psyched for the full feature… 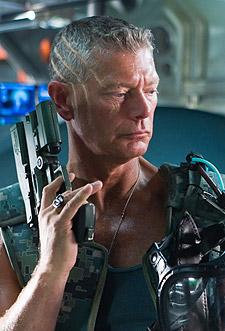 * On finding his way into “Avatar”: “I’d auditioned for ‘Aliens’ about 20+ years ago, and (James Cameron) talked about that in our conversation, so, y’know, I’ve kind of gone on record as saying that this was the world’s longest callback. But what happened was Margery Simkin, who is his casting director on Avatar, showed him…for my show (‘Beyond Glory’), the ad in the New York Times and other papers is this kind of really hard-nosed military shot, very macho, and Margery said, ‘Hey, Jim, look at this!” And he went, ‘Huh. Lang. Huh.’ And then at the same time, they both kind of went, ‘Quaritch!’ So that was it. It was very fortuitous, you know?”

* On first reading the script: “Because he’s an excellent writer and extremely descriptive and specific, (James Cameron) paints a very, very clear picture of what’s happening and what this world is. And, you know, it never for a moment entered my mind to doubt that he would make it real. I mean, that may be because I have a good kind of reader’s imagination, in a way. You know, I’m able to visualize. Like, I believe magicians. I’m a good audience for magic and stuff. I tend to make that bargain with a writer quite easily, and so it just never occurred to me that it would be anything less than what it said it was going to be on the page. And I look at that now, and I think, ‘God, that was kind of lamebrained of you. This is weird, difficult stuff that doesn’t exist.’ But he’s got such a great team of colleagues and people who are committed to his vision on this thing that it’s all come together.”

* On his character, Col. Quaritch: “He’s an old Marine, and he’s very hard and tough, he’s very skilled, he’s very ironic, he’s very sharp. And he’s something of a cynic, which is never a good thing to be, but he is. He’s got kind of a jaundiced view of the mission now, because it seems doomed to failure on a daily basis, and his job is basically to keep his people alive. It’s a flat-out hard thing to do, y’know? And there’s kind of a hearts-and-minds attitude that he really can’t cope with. It’s difficult to do your job when you’re interested in preserving more than protecting. So I think it’s kind of brought some hardness and change in him. It just makes him into a pretty tough guy. But at the same time, there’s so much that’s admirable about him, which makes him kind of intriguing, because I don’t think you doubt his resolve, you don’t doubt his personal qualities or his courage or honor. He kind of carries the vestiges of the Marines with him.” 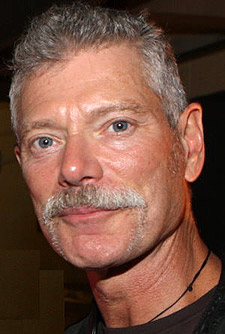 * On getting in shape for the role: “I was relatively buff, because I was working in a tanktop half the time on stage, anyway, but I just went kind of into hyperdrive after that and really worked to beat that old body into shape, to get that carcass where…I didn’t want to be looking at it and see anything hanging where it shouldn’t be hanging.”

* On what he’s seen of the film thus far: “When you see it in its final form…and there are many pieces that I’ve seen in their final form…it’s quite stunning. You just kind of go, ‘Oh, yeah. That’s it.’ But, still, even what I’ve seen it in its final form, I haven’t seen it in, say, IMAX, let alone IMAX 3D. I haven’t seen it on the big screen. I haven’t seen it with Horner’s music. You know what I mean? So there are things that I haven’t seen. But what I have seen…I mean, I remember looking at pieces of it over two years ago, when I was looking at some of it in fairly rudimentary form, just sort of animation templates, and even that stuff was exciting to me. You could just imagine what it was going to be like, and to watch the metamorphosis has been totally cool.”

* On how people should approach “Avatar”: “Just approach it like a movie and enjoy it. Buy your popcorn, put on your 3D glasses, and take the ride. And then when you’re done, come out, talk about it, and then go back and see it again, because there’s a lot to see, y’know? (James Cameron) makes films that are popular for everybody, but they’re also very, very much for audiences of sophistication and discernment. There’s a lot to see on his pictures. I mean, look, I think it is unrealistic to think that you can do kind of ‘Titanic’ numbers on it, but nevertheless, that’s what you strive to do. But for my part, I just wanted to play my role in this whole process as fully and as well as I could. I just wanted to hold up my end of it.”

Check out the latest “Avatar” trailer – the three-and-a-half minute one – by clicking here, and be sure to keep your eye on Bullz-Eye for the full-length chat with Stephen Lang!