Hi, I’m Bob and I’ll be your guest “Mad Men” blogger for today — and what a day it is. We have work masquerading as parties and parties pretending to be work. (Guess which turns out to be more interesting?) We see the hidden talents and proclivities of the ladies and gents of Sterling Cooper as mind altering substances, liquid and herbal, and good and bad behavior of all sorts rules Derby Day, 1963.

“My Old Kentucky Home” opens with a call back to last week‘s totemization of the hotness that was early sixties Ann Margaret, as Peggy Olson supervises an audition with a red-maned lass who claims to have acted in a production of Tartuffe but who sounds like she’s answering the $64,000 question when she says it was written by “Moliere?”  Harry Crane smiles like a loon and tries to ask more about her, but Peggy makes short work of him.

And it’s Peggy we’re going to be spending a good chunk of tonight learning to admire ever more as she realizes that she is a skilled creative, even if Sterling Cooper “hates creatives.” The cause of all that is a last minute assignment to put together material for a new Bacardi campaign, forcing her, pretentious Paul Kinsey and turtlenecked hipster Smitty to work over the weekend as the higher ups, which now include both Pete Campbell and Ken Cosgrove, all attend a swank Derby-themed shindig hosted by Roger Sterling and his new young wife, Jane.

Meanwhile, things aren’t easy on the home front. Not yet retired secretary Joan Harris, nee  Holloway, and her new husband, who, er, raped her last season are getting ready for a dinner party for his MD colleagues. The good news is that not even this psychotic can keep Joan under his thumb. As he fearfully tries to bully her — over table settings — he says angrily that he doesn’t want to have a fight, her answer is succinct: “Then stop talking.” 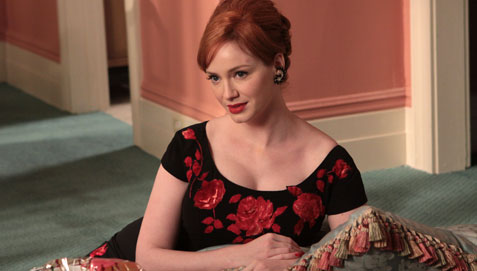 Joan is a survivor, no doubt. But before the night is over we learn that her husband may have some potentially serious career problems on top of his obvious violent tendencies — which nevertheless seem under control, just for the present.

Things are only a little less fraught at the home of Don and the now very pregnant Betty Draper. The Drapers are dealing with Betty’s dad, whose slide into dementia seems to be manifesting itself this week as something more like eccentricity, having young Sally read to him from The Decline and Fall of the Roman Empire (which, perhaps fortunately, she doesn’t seem to quite understand).

For her part, little Sally shows a new side of her own when she steals a fiver from grandpa’s money clip, correctly sensing that everyone will assume it’s simply another example of his slipping memory when he notices it. Don and Betty make their escape, but Gene’s obsession with finding the lost five-spot catalyzes some racial disharmony between him and Carla, the African-American housekeeper.

That’s hardly the only such discomfort of the night. Soon enough we’re in heavy cocktail mode at Roger’s party and, before long, Roger is serenading his guests in blackface doing what  I guess is a bad Al Jolson impression while singing Stephen Foster’s “My Old Kentucky Home.” The line “‘Tis Summer, the darkies are gay” couldn’t be much more offensive and just plain strange sounding to modern ears. No doubt, this country club is “restricted.” No  Jews, no Catholics and nonwhites permitted inside only to serve. This was a perfectly ordinary state of affairs only 46 years ago.

Meanwhile, things take a really interesting turn back at the Sterling Cooper offices when Paul and Smitty discuss the difficulty of working while drinking as drinking makes them sleepy. I can relate as I can’t write a coherent word if I’m not 100% sober; it’s clear I’ll never work in sixties advertising.  Instead of a quick run to the nonexistent Starbucks, though, Smitty and Paul decide that a couple of hipsters like themselves require some reefer to make the creative juices flow and, besides, it’s Saturday.  Peggy, who’s actually trying to accomplish something, is nevertheless in serious shell-breaking mode lately and demands in on the fun while fending off flirtations from both Smitty and Jeffrey, Paul’s Tom Cruise looking college-buddy turned ultra-slime drug connection. “I’m Peggy Olson and I want to smoke some marijuana,” she proclaims.

Later on, Paul has fought over his singing with the annoying Jeff and taken to quoting T.S. Eliot’s “The Hollow Man” while musing morbidly over the Cuban Missile Crisis and the fact that he’s going to die someday. Peggy blissfully sends Paul and Smitty away as she goes to finish her masterpiece while dealing very sweetly with her overzealous matron of a new secretary.  No wonder every guy who’s seeing her right now is kind of smitten. She’s even more attractive half to three-quarters stoned.

Meanwhile, Don can’t wait to escape the party but instead finds himself sharing a bit more of himself than he ever would with an actual friend when he meets up with a similarly alienated older gentlemen while seeking an Old Fashioned at a deserted bar in the club. All the Kentucky bourbon has been drunk up for Mint Juleps and no one is minding the store, so Don leaps over the bar and starts practicing some serious old school mixology of his own.

He treats himself and his friend-for-a-moment to what looks like an absolutely first-rate Old Fashioned substituting rye (Old Overholt, to be precise) for the more commonly used bourbon. We get the feeling Don might have done this professionally at one point as he talks of working at a high-end roadhouse parking cars as a teen and his urinary revenge for ill treatment.

Betty also encounters a somewhat older gentleman — and this one is very much on the prowl. Showing her occasional flair for somewhat inappropriate encounters with males of various ages, Betty allows the gent to feel the new life in her stomach. Except that, somewhat worrisomely, she says the baby has stopped moving. (Does Don really seem a little concerned when she accepts offers of a drink, or am I projecting?) Later the man turns up again and turns out to be in state politics. He, Don, and some others discuss how liberal Republican Nelson Rockefeller’s divorce and remarriage will probably kill his chances at the GOP nomination. Will they really be stuck with far-right fave Barry Goldwater in ’64? Will they live to see how Goldwater will, a few decades on, seem almost moderate and the idea of “liberal Republicans” become almost laughable?

More drinking occurs, of course.  The new Mrs. Sterling gets sloshed to the gills and suffers a serious overdose of honesty having to do with Don and Betty’s near break-up last season, which in turn leads the kind of dialogue between Roger and Don that makes you wonder if their professional and personal friendship is forever broken. Roger says that people look down on him and his marriage to a very young wife because he’s happy. Don responds “No one thinks you’re happy. They think you’re foolish.”

On the other hand, the Draper marriage seems to be in stronger shape than we might have suspected. Don does the right thing for a change and ends the evening, and the show, making out with his beautiful wife.

He’s not the only one whose salvaged a nasty situation with some goodness. Just a bit earlier in the night, little Sally decides to cut the childhood kleptomania and theatrically “finds” the money grandpa “lost.” Grandpa seems to know the score — he might be getting senile but he’s not dumb — and does what grandparents always do and indulges the girl by allowing her to read some more of the classically racy (you might even say “inappropriate”) passages from Edward Gibbon’s famed history of Roman decadence. That’s a close to sticky sentimentality as this show gets.

A few assorted highlights about what is clearly my favorite episode of the year so far, at least. It’s definitely among the funniest “Mad Men” episodes, while having no shortage of the usual enigmas and dramatic tension.

* Fans of female-on-female viciousness I’m sure will relish the meeting between Joan and Jane. It’s not quite Bette Davis vs. Joan Crawford, but their animosity feels real.

* Remember the hidden talents I mentioned? We hear Roger, Paul, and Jeffrey the drug dealer sing acceptably well — if offensively in Roger’s case. Joan picks up an accordion and makes like Edith Piaf. (Is that really Christina Hendricks’ voice? I tend to think it is and I’m impressed.) Best of all, Pete and Trudie Campbell wow us and the assembled Derby Day racists with a genuinely impressive Charleston. Vincent Kartheiser and Alison Brie, if things go wrong careerwise, there’s always “Dancing with the Stars” or a road company of “The Boyfriend.”

* And a cocktail moment. As I understand, rye — which is coming back into fashion and now for very good reason, because it’s good — was actually used in Old Fashioneds before bourbon became the standard. Old Fashioneds, by the way, are so named because they are maybe the oldest cocktail.If you’ve never tried them, they’re great and very easy to make. They consist of two ounces of whisky, bitters, half an ounce of simple syrup or sugar water (one teaspoon of sugar per half-ounce), ice and some more water and then you stir and maybe pop in a marischino cherry. If you really want to get fancy you can muddle an orange slice, but I think Don was muddling a cherry in that bar’s pestle.