Today, we take jazz too seriously for its own good. There was a time, though, when jazz was at least as edgy and disreputable as rap and rock and roll were not so long ago. Four recent DVD releases raid the Warner Brothers library — and borrow the name of our nation’s best known movie tough-guy and jazz lover — to give us a fascinating but decidedly uneven look into the low down past of what we now call “America’s classical music.” 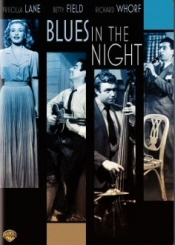 Directed by skilled journeyman Anatol Litvak, 1941’s “Blues in the Night” is a tale of hard-luck late-depression era musicians on the run and features enough young talent on hand to fascinate any film geek. Writer Robert Rossen would go on to directing and become one of Hollywood’s most successful realists with classics like “The Hustler,” while supporting actor Elia Kazan would go much further, becoming by far the most influential American theater and film director of his generation with “A Streetcar Named Desire” and “On the Waterfront”; then-editor Don Siegel is credited with the film’s enjoyably wacky montage sequences and eventually became one of America’s greatest action filmmakers (“Dirty Harry,” the 1956 original of “Invasion of the Body Snatchers”) and the primary directing mentor to Clint Eastwood. On its own, however “Blues in the Night” is a lot more “interesting” than actually “good.” It’s an intriguing attempt to set the socially conscious early Warner Brothers aesthetic to a jazz beat, but the story isn’t strong enough, leading man Richard Whorf isn’t much of a screen presence, and the corn-level is excessive. On the other hand, this disc also has some nice extras, including one of the very many Warner Brothers cartoons to include the song “Blues in the Night,” which was written specifically for the film and netted an Oscar nomination for Tin Pan Alley greats Harold Arlen and Johnny Mercer.

Balancing out the lefty, pro-FDR agenda of “Blues in the Night” is a film from the height of the McCarthy era, 1955’s “Pete Kelly’s Blues” – best known to the friends of my youth as “that weird twenties jazz movie with Jack Webb.” Webb, who also directed, had only recently forged an onscreen tough-guy person as super-dick Joe Friday of the L.A.P.D with the “Dragnet” radio series and a 1954 film version. This widescreen, color epic attempts to blend Webb’s hatred of all things criminal with his love for the early days of jazz.

It’s a fun but uneasy mix. Though the plot makes little sense and the music sometimes sounds more 1956 than 1927, the pace is a model of Dragnet-style efficiency and, Webb aside, it’s got quite a cast. The lovely and talented Janet Leigh shows up as Kelly’s main squeeze, none other than Lee-Freaking-Marvin is around as the second banana musician-tough guy, and an Oscar-nominated performance by singer Peggy Lee (“Is That All There Is?”) as an abused moll is touching. It also includes a musical appearance by jazz and pop great Ella Fitzgerald, who couldn’t really act but who could sing better than any human before or since. The almost fatal flaw here is that Webb himself simply lacked the charm and presence of a strong romantic lead. Maybe that’s why Joe Friday never seemed to go on a date.

(Also, for those of us who grew up watching “Dragnet,” it’s weird to see his character winking at, and even engaging in, all that illegal prohibition-era boozing. You half expect Webb – who gave many an anti-reefer speech on his TV show — to knock a drink from someone’s hand and lecture them on the dangers of bathtub gin.) 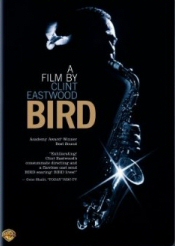 Jack Webb might have been the first right-leaning screen cop and filmmaker to have a serious passion for jazz, but, competent as he was, he was far from the best. Clint Eastwood’s love of the music is so great that he couldn’t resist throwing lengthy stretches of the stuff into his otherwise taut directorial debut, the pre-“Fatal Attraction” 1971 thriller, “Play Misty for Me,” and it was a better movie for it. And there’s no complaints at all about the casting of his first “serious” film as a director, the 1988 biopic “Bird.” Though he won a Golden Globe and the acting award at Cannes, star Forest Whitaker (“The Last King of Scotland“) was robbed of a nomination for an Oscar (which he should have then won) for his biting, but spot-on sympathetic portrait of the heroin-addicted jazz trailblazer Charlie Parker. There are some extremely funny moments, but this an overwhelmingly dark film, both literally and figuratively, and not on the same level as Eastwood’s amazing recent run of instant classics, but Whitaker’s performance and Eastwood’s clear love of the music makes this film well worth anyone’s time.

Ironically enough, a few years before, non-actor Dexter Gordon was Oscar nominated for his compelling but extremely mumbly turn as a substance-addicted jazz man in 1984’s “’Round Midnight.” Largely inspired by the life of another troubled bebop innovator, Bud Powell, this film stars real-life jazz great Gordon as Dale Turner, an expatriate saxophonist falling prey to the bottle and stumbling through mid-fifties Paris. A chance at salvation is offered by his friendship with an ardent fan with troubles of his own, played by François Cluzet (most recently seen free-running his way through Paris in “Tell No One.”) Directed by Bertrand Tavernier, this is a fine example of what Quentin Tarantino calls a “hang out” movie — a film that’s not so much about its plot, but about spending time with some cool people, and that’s precisely what this sincere and easygoing semi-classic offers.

Naturally the other attraction here is lots of great bop and blues, which, going against the usual film production routine, was actually recorded live during the production. Director Tavernier’s idea was to give the film a greater immediacy. It works and no doubt contributed to that Best Score Oscar given to keyboardist/composer Herbie Hancock (“Rock It”), who plays a Southern cooking-obsessed piano player in the film. “’Round Midnight” is a sincere ode to jazz and a look at how devotion to art can destroy a life, while also making it worth living.