This holiday season…a minivan wrecks into a newscasting building! Thrill to the startled anchor! No carnage, just good reaction!

With 4 days ’til Christmas, a publicist sent to me… 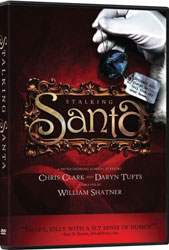 What’s that strange taste in my mouth? By God, I think it’s the taste of a clean palate!

After two days of less than stellar Christmas flicks (and, boy, is that an understatement), I’ve stumbled upon a new film which – dare I say it? – has the potential to become a cult classic…and, for once, it’s not because it’s so awful that its sheer badness has earned it kitsch value, a la “Santa Claus Conquers the Martians.”

“Stalking Santa” is a mockumentary about Dr. Lloyd Darrow (Simon Taylor), a man who’s on an obsessive quest to confirm or deny the existence of Santa Claus, even if it involves risking a Christmas morning devoid of presents. In a twist which will amuse fans of the classic ’70s series, “In Search Of,” the narration is done by the inestimable William Shatner, who provides details about Darrow’s investigations, as well as other self-proclaimed “Santologists,” with absolutely no hint that it’s all completely fictional. Shatner’s deadly-serious delivery turns the most ridiculous claims into hilarity, such as his discussion of a wax cylinder that captured a voice during a seance which, when played backwards, reveals the words, “Ho, ho, ho, merry Christmas,” or the shot of an ancient Egyptian hieroglyphic which bears a striking resemblance to Kris Kringle himself. (Politically correct or not, I laughed out loud when they showed artwork of a chubby Asian fellow sitting in a lotus position and gave it the identifier of “Buddah Craus.”)

Lloyd reportedly has many supporters in his quest, but the truth is, it’s really just him and his college intern, Clarence (Daryn Tufts), who, uh, probably isn’t getting actual college credit for his work. Lloyd’s the president and CEO of an organization known as Tangible Evidence, Real Discoveries…and don’t think he doesn’t get shit for that acronym. He’s a family man, and his kids are a little uncertain about his quest, which you’d expect, since it might mean they don’t get any presents. In particular, his son is sick of his schoolmates’ tauntings, but his lovely and pregnant wife Kylie (Sierra Squires) is behind him, even though there’s no humor in her laugh when she comments that “Santology” isn’t exactly something you get paid for. (The line is followed by a shot of her working in a fast food restaurant as the family breadwinner.)

Yes, it’s easy to dismiss the entire concept of the film with a wave of the hand and a quick uttering of “there IS no Santa Claus, the end,” but only a Scrooge would do that. (Right, David?) But, seriously, this is a really funny concept that’s taken to hilarious heights and looks professional enough that, at least in appearance, it could fit onto TLC or The Discovery Channel without a second thought, especially the faux archival footage which suggests a government conspiracy to keep the existence of Santa under wraps so as not to disturb the world economy. Yeah, it descends too far into total ridiculousness on occasion (the idea that the Sphinx originally had antlers like a reindeer fell completely flat), but what keeps it working is the fact that virtually everyone believes Lloyd’s a complete nutjob…because, of course, everyone knows there’s no Santa Claus…right?

(P.S. Santa, I totally know you’re real, so I’m sure you’ve chalked this up to creative license and have in no way removed that copy of the 5-disc “Blade Runner” set from your sleigh.)

Colbert chosen as AP Celebrity of the Year

He may not have won any Emmys, and he may not have made the primary ballot in South Carolina this year, but Stephen Colbert was chosen as the AP’s Celebrity of the Year. He topped out over #2 J.K. Rowling and #3 Al Gore. That’s not shabby at all, considering the man is much more entertaining than either of those two.

Said Colbert in response to winning the award,

“In receiving this award, I am pleased that I was chosen over two great spinners of fantasy — J.K. Rowling and Al Gore. It is truly an honor to be named the Associated Press’ Celebrity of the Year. Best of all, this makes me the official front-runner for next year’s Drug-Fueled Downward Spiral of the year. P.S. Look for my baby bump this spring!”

AP Celebrity of the YearStephen Colbert

He knows when a good thing is finished and when to move on. Therefore, Sacha Baron Cohen is retiring his two most famous characters, Borat and Ali G. Says Cohen about the retirement,

“When I was being Ali G and Borat I was in character sometimes 14 hours a day and I came to love them, so admitting I am never going to play them again is quite a sad thing.”

Undoubtedly Baron Cohen will continue to create characters and ideas that will keep him in the limelight for many years to come. You can see him currently in “Sweeney Todd” in theatres across the universe.

So what do you say when a show is simply gone too soon? The “final” episode of “Journeyman” was a pretty fantastic exit for an ongoing piece of entertainment that was just getting started.

The episode opened with Dan having traveled to a mental hospital not to far in the past – only September of ’07. There he meets Evan, a man who claimed to be a fellow traveler. Of course, since he’s in the looney bin, his assertions are questionable. He tells Dan that he’s there to help him escape and meet up with a beautiful woman in a photograph. Evan also tells Dan that he no longer travels due to the meds he’s on, which literally keep him grounded. After some convincing, Dan provides a distraction, Evan escapes and Dan immediately travels back to the present. There he discovers Evan was killed shortly after his escape by jaywalking. So it’s back to September…

Meanwhile, Jack is busy causing a stink with Elliot Langley, trying anything he can to connect with the guy and get him to admit that he knows Dan and something about his travels. Katie is getting bad marital advice from her sister and Livia’s just plain getting married.

The story of Evan was a tragic thing of beauty. All he wanted was to reconnect – even if only for a moment – with the wife he sacrificed during his travels. He sacrificed their entire marriage so that she could live a full life, while it turned out that the time line wasn’t so kind to Evan: he was destined to die on the same day no matter what Dan and Livia did to try to help him.

In the episode’s final moments, Dan and Langley finally have a confrontation of sorts. Elliot admitted to not only knowing Dan, but also knowing a fair amount about what was going with him and that it would be dangerous to continue on with an acquaintance. He also told Dan that the “system” was breaking down and that he was the last traveler. Dan replied, rather Yodaishly, “No, there’s another one.” He of course was speaking of Livia. He then went home to Katie and stood his ground, saying that even though through meds he too felt he could ground himself, that it wasn’t that path he wanted to choose. Rather ironic and sad that while the character of Dan Vassar chose to continue traveling, NBC is the meds that are going to keep him from doing so.

Is “Perfidia” an appropriate ending for “Journeyman?” Well, it wasn’t ideal and certainly had that feeling that there was plenty more story to tell, but since it’s the only ending we’re likely to get, it served its function and didn’t leave viewers hanging in any major way. One of the great little moments of the piece was Dan seeing himself traveling for the first time in the cab. It’d sure be great if someone would greenlight a “Journeyman” miniseries to give a proper ending to the story, although that’s highly unlikely.